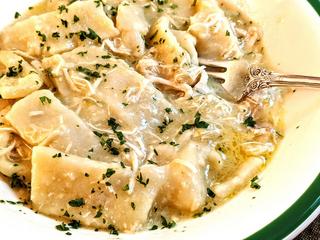 My Grandmother's ("MaMa's") Chicken and Dumplings

The lingering isolation and economic uncertainty of the pandemic have been difficult enough for all of us. But add in a contentious national election and our need for Comfort with a capital C has hit an all-time high.

And when we're craving that comfort, nothing quite satisfies like those things that comforted us as children. For me, the ultimate such comfort is my grandmother's dumplings, not just eating them, but the process of making them as well.

Throughout my childhood, MaMa was my best friend. She was also a talker. Granddaddy once said that if there was ever a flood, she'd talk till the water came over her nose. That wasn't always easy when she was still with us, but little did we realize that her constant monologue would feel like a blessing more than twenty years after her death.

Because it had been so ever-present back then, to this day her voice remains fresh and present in my memory, as if she's still here, giving me a running commentary on life, my cooking, and people I barely—or never—knew.

As I mix, roll, and cut the dumplings, drop them into the broth, drink in the heady aroma that fills the air, and then sit down to savor that first bite, I hear that voice in my head, clear and strong. And it is almost as if she is right here beside me.

Sometimes, when we're needing comfort, simpler is just better, and that's all there is to it. I often add things to the dumpling pot that she never did: carrots, celery, herbs, and sometimes a grating of nutmeg. This past weekend, however, I needed it to be as much like hers as I could make it.

All the same, I can no longer bring myself to make chicken broth without those aromatic vegetables, at least a sprig each of sage and parsley, and a few slices of fresh gingerroot. So, while I made the broth my way, it was strained before the dumplings were added. The flavors of those seasoning additions were less direct and the finished dish at least looked like MaMa's.

The other thing I can't resist is a finishing sprinkle of minced parsley when I have it on hand. MaMa would've enjoyed laughing over my "fancy" garnish, but she would also have enjoyed the visual touch and subtle flavor it added—and of course talked about it for days afterwards.

For the chicken and broth:

For finishing and serving the dumplings:

1. Cut up the chicken as you would for frying. Scatter the onion over the bottom of a heavy-bottomed 6-8 quart Dutch oven or stockpot. Add the carrots and celery, then lay the chicken pieces over the vegetables. Pour in the water or broth, season lightly with salt and pepper and if liked, add the optional sage, parsley and sliced gingerroot. Turn on the heat to medium-high and bring it to a simmer. Adjust the heat to a slow simmer and cook, undisturbed, until the chicken is fork tender, about 1½-to-2 hours. Take it from the heat and leave it, uncovered, to partially cool for half an hour. Carefully remove the chicken, let it cool completely, and then skin and bone it. Roughly shred it, cover, and set it aside.

2. Strain the broth, discarding the solids, and wipe out the pot. If you like, let it settle and skim off some or all of the fat that will have floated to the top. Return 8 cups of broth to the pot and bring it back to a simmer over medium heat. Meanwhile, sift or whisk together the flour, baking powder, and salt in a large bowl. Cut in the lard or shortening with a pastry blender (or two knives) until it resembles coarse corn meal with lumps no bigger than very small peas. Make a well in the center of the flour and pour in about 2/3 of the milk. Mix it into the dry ingredients, adding more milk as needed, until the dough is cohesive and soft but not too wet and sticky.

3. Lightly flour a work surface and turn the dough out onto it. Flour your hands and gently knead the dough until it is just smooth—about 4-5 turns. Shape it into a ball and let it rest 5-10 minutes.

4. Meanwhile, add the chicken to the broth, bring it back to a simmer, and let it heat through while you roll and cut the dumplings. Divide the dough into two equal balls. Lightly flour the work surface and one lump of dough and roll it out as you would a pie crust 1/8-inch thick. Cut into 1-inch wide strips and cut the strips into 3-to-4 inch lengths to suit your own tastes.

5. Drop the dumplings into the simmering broth a few at a time, then roll and cut the second lump into dumplings and add them to the pot. Simmer, gently stirring occasionally, for about 12-15 minutes, or until the dumplings are cooked through and tender. Ladle them into individual soup plates or deep bowls, sprinkle with parsley, if using, and serve at once.

Damon Lee,
What a great memory and good recipe! My Grandma was my best friend too. I lived with my grandparents during my college years.
Chicken and dumplings were a favorite of hers--both to cook and to eat. Whenever she cooked them she put them in a large jade Fire King bowl to set on the table. When she passed that was one of the items I requested to take. It's in my china cabinet ready for me to fix chicken and dumplings.
On what turned out to be her last birthday, my wife and kids took her out to eat and she ordered chicken and dumplings.
Not only comfort food, but comforting memories.
You and I were blessed to have such women in our lives.
Thank you.

Thank you, Steve! What a lovely memory! I hope you use that Jade Fire King bowl often and that your children will be eager to assume the legacy when the time comes! Thank you for sharing that! Peace.

OMG! Cheryl and I love chicken ‘n dumplings. I am going to use your dear sweet MaMa’s recipe. Many thanks.

Thank you, Herb! I hope you enjoy them. Changes are soon coming to this page, so please stay with me for new things!