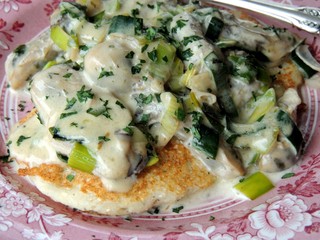 But even though the landscape is trying to act as if it's spring, it's still bracingly cold and perfect cooking weather. It's also the height of the season for our local oysters. They're wonderfully briny and yet sweet, especially raw, but since they're the clustering type, they don't lend themselves to being presented on the half-shell. Read More 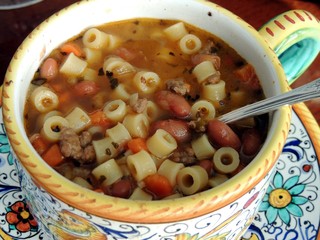 My Pasta and Bean Soup, or, if you really must, Pasta e Fagioli alla Damon

When the weather turns cold as it finally has done here in Savannah, nothing warms and satisfies me quite like the old Italian classic, Pasta e Fagioli, or as it's sometimes called in dialect "Pasta Fazool." In a single bowl, it combines the homey comfort of my father's beloved bean soup with my own love for beans and pasta in general, not to mention my lifelong love of both Italian and Southern cooking.

It's also a fine example of the many parallels between the cuisines of the American South and Italy. Both sets of cuisines have remained close to the land, even in urban centers such as Atlanta and Milan, and have withstood the relentless tide of modernization and the silly capriciousness of that recent culinary plague, "reinvention." Read More

I enjoy your plating as much as the recipes!!!

Thank you, Daniel! It's a deep learning curve but I think I'm beginning to get my groove with food styling.