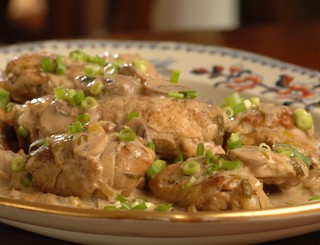 At the end of the 1970s, DuBose Publishing Company of Atlanta released a slim little volume called Four Great Southern Cooks. Despite its unassuming appearance, this book was destined to become one of the great treasures of traditional Southern cooks and food historians. Tattered copies that survive are fiercely guarded as family heirlooms, especially here in Savannah. Read More 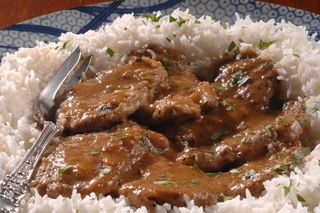 Pork Medallions (a. k. a., Scaloppine) with Sage and Madeira. Photography by John Carrington
For a lot of the country, Labor Day marks the end of summer. This is rarely true for Savannah. However, as August faded into September this past week, there was actually a welcome suggestion of autumn in the air. It was only a suggestion, mind you, but that was still enough to stir my appetite for autumn’s heartier cooking, in particular an old-fashioned seasonal favorite, Southern pork scaloppine.

You’re probably thinking “Southern scaloppine” is an oxymoron, since most Americans believe that scaloppine, Italy’s name for medallions of meat pounded thin, cooked quickly, and finished in gravy made by deglazing the pan with wine or broth, is a concept we’ve only become acquainted with during the last half-century. But that’s only because early American cooks didn’t use the Italian name for the concept. It’s actually quite an old idea that wasn’t confined to the boundaries of Italian kitchens. Early cookbooks that Europeans brought with them to America often gave recipes for it.

The old English name for scaloppine was “collop,” and it was used for any thin slice of meat, just as “escalope” was in French, though it most often referred to thinly sliced veal round. That’s probably because, until dairy practices changed in the 1930s and 40s, veal was actually commonplace and relatively cheap. However, the word was also applied to similar cuts of beef, mutton, or venison. So was the cooking technique.

Pork was rarely mentioned in connection with those recipes until the mid-nineteenth century. While salt pork and ham were ordinary everyday food in the days before refrigeration, fresh pork was seasonal, especially here in the South.

The early recipes for pork scallops were more often called “steaks,” and while they could be cut from the round, they were more often taken from the loin and delicate (some would say bland) tenderloin. While the latter have become quite popular and commonplace today, in the past they were a rare late-autumn treat.

Recipes like this one were as uncommon as they were lovely:

213. Pork Steaks.—The tenderloin makes the best steak. Cut them a quarter of an inch thick; fry in boiling lard, turning constantly; serve hot. Make gravy by pouring in a small quantity of boiling water; let it boil up once, and pour over the steak. Serve with them tomato or onion sauce. Steaks may be cut from the hindquarter or chine.

Mrs. Hill was using “fry” very loosely: what she intended was the same light sauté as a scaloppine, the constant turning necessary to keep the thin pieces of meat supple and tender. Though she was silent as to seasonings, most of her pork recipes called for the meat to be rubbed with salt, pepper, and sage, a triad that was practically a given in Georgia from her day until now.

Other cooks used wine in the pan gravy, and in later recipes, the medallions were dredged (sprinkled) with flour before sautéing, then added back to the gravy after browning for a brief finishing simmer—exactly like scaloppine.

The following is one such recipe that has become a personal favorite for fall in Savannah, where at times the climate is autumnal in name only. The key ingredient is Madeira, a wine that was once practically a religion in this town and to this day remains an integral part of its cuisine.

Pork Medallions (or Scaloppine) with Sage and Madeira
From my latest book, The Savannah Cookbook.
Serves 4

1. Wipe the pork dry with an absorbent cloth or paper towels. Trim away any fat and silver skin and cut it crosswise into 8 equal medallions about 1-inch thick. Lay them on a sheet of plastic wrap or wax paper, cover with a second sheet, and gently pound them out to ¼-inch thickness. Season both sides well with salt and pepper. Sprinkle the sage evenly over both sides of the pork, and rub it into the surface.

2. Warm the drippings or butter and oil in a large skillet or sauté pan over medium heat until bubbling hot. Raise the heat to medium high, quickly roll the pork in the flour, and slip it into the pan until it is filled without crowding, cooking in batches if necessary. Fry until golden brown, about 2 minutes, turn, and brown the second side, about 2 minutes longer. Remove the scallops to a warm platter.

3. Stir a teaspoon of flour into the fat in the pan. Let it cook for a minute, stirring, and slowly stir in the Madeira. Cook, stirring and scraping the pan, until thickened, then stir in the broth. Bring to a simmer and cook until lightly thickened. Return the scallops to the pan and cook, turning them several times, until they are heated through and the sauce is thick. Turn off the heat, taste and correct the seasonings. Return the pork to the platter, spoon the gravy over it, and serve at once. Read More
2 Comments

You taught me to "pound" port tenderlions several years ago --- now it is a basic in the house!!! I may make this tomorrow for dinner!

Thank you! This really is a great recipe. Wish I had some tenderloins in the house right now!