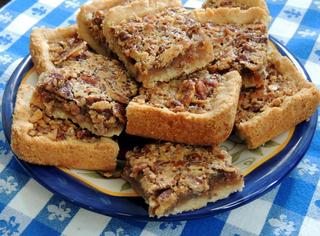 Autumn has always been my favorite time of year. While it's often depicted as an ending—as the quickening of summer fades and winter's long nap looms—for me, it feels more like a beginning, a time of hope and fresh starts. And this year, we need that sense of hope, of new beginnings more than ever before.

But aside from that, one of the things I love best about the season is that it's such a perfect time for cooking. The warmth of the kitchen not only becomes bearable, but welcome, and the raw materials we have to work with is at its most varied and best. Everything has fattened itself up for the dormant cold season ahead—and I don't mean just animals like us. Even the fruits and vegetables of fall have a density and richness that spring and summer produce often lacks.

This is also the time of year that I bake more. And though I have one of the most notoriously underdeveloped sweet tooths in America, come fall that baking gets richer and sweeter. Probably it's because so many favorites—apples, cranberries, pears, pecans, persimmons, sweet potatoes, and walnuts—are at their prime all at the same time.

Moreover, when those things are paired with such autumnal flavors as cinnamon, nutmeg, citrus, bourbon, sherry, molasses, brown sugar, and caramel, it's nothing short of magic.

Of all those things, however, nothing speaks to me of the season quite as evocatively as pecans. Probably that's because, when I was growing up, every pastorium we called home had an enormous pecan tree shading one corner of the back yard. Unhappily, those trees are nothing more than a memory now, but as luck would have it, my lovely friend Edna Williamson and her family have a grove of pecans down in Jesup.

Among those trees are a few that produce a short, fat little pecan called Elliot that Edna always generously shares with me. No larger when shelled than one's thumbnail, the Elliot pecan's flavor is as big as it is small, and I confess a lot of them go straight from the shell to my mouth. But I do try to hold back some for roasting in butter and for adding to such heady fall treats as these rich, buttery bar cookies.

A cross between two Southern favorites—lemon squares and pecan tassies, these bars' mellow combination of bourbon, brown sugar, and pecans whispers of changing leaves, that golden light that bathes late autumn afternoons, crisp air, and the pungent aroma of the season's first fire.

2. Sift together 10 ounces of flour, the cornmeal, ½ cup sugar, and small pinch salt. Add 8 ounces (1 cup, or 2 sticks) of butter and work it into the flour until smooth. You may do the first part of this step in a food processor fitted with a steel blade. Put in the flour, meal, sugar, and salt and pulse several times to sift. Add the butter and process until the mixture resembles coarse meal. Turn it out into a mixing bowl and finish blending by hand. Wrap and chill for 30 minutes.

3. Press the dough into a 9-by-13-inch pan in a uniform layer over the bottom and about ½-inch up the sides. Lightly prick it with a fork and bake in the center of the oven for 20 minutes, or until it's beginning to color, then remove it from the oven and let it cool slightly.

4. Meanwhile, melt the remaining butter, let it cool slightly, and beat it together with the eggs, remaining ¾ cup of sugar, the brown sugar, and a small pinch of salt. Stir in the bourbon and toasted pecans. Sift in the remaining tablespoon of flour and stir until smooth. Spread evenly over the crust, smoothing it with a spatula. Bake until golden and set, about 25 minutes. Cool in the pan on a wire rack and cut into 24 squares.

Recipe and some text adapted from Essentials of Southern Cooking, copyright © 2013 by Damon Lee Fowler, all rights reserved.