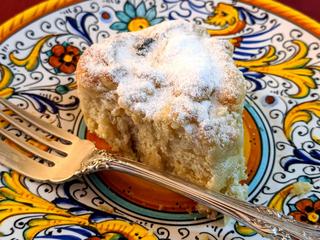 Probably the biggest challenge to comfort baking during the pandemic quarantine has been the shortage of basic ingredients. Early hoarding made flour scarce, but now, while it's still not plentiful, it is available; leavening, on the other hand, continues to be in very short supply. The yeast and baking powder shelves at most markets have been empty for weeks now, and while mail-order sources haven't dried up, on-line ordering is expensive and usually means ordering more than most of us can use.

One fall back alternative is self-rising flour, which is regularly, if unevenly, available. But self-rising flour can't be used for yeast baking, for thickening, or for most pastry, and unless you have a large family and bake a whole lot, having two kinds of flour on hand can be impractical. Moreover, baking powder does go stale and lose its potency, so most self-rising flours contain too much in order to compensate for that, which can lend a harsh aftertaste to baked goods. The only way to counteract that is with sugar, and often more than is necessary.

It's possible to make your own leavening. If you've still got a little bit of yeast, one can make a creditable sourdough starter. It's also possible to make sourdough using only naturally airborne yeast, but that's trickier. And in either case, it'll take several days before it's usable, and once it's going, will have to be regularly fed and nurtured.

Baking powder, on the other hand, is simple to make, doesn't depend on the capriciousness of airborne yeast, and doesn't need to be fermented. Moreover, its components are not, so far, being hoarded or in short supply.

But first, it's useful to understand a little about baking powder. The rise in any baked good occurs because the leavening produces a gas that gets trapped in the dough, creating millions of tiny air pockets. Yeast is a living organism that does this naturally as it feeds on the dough itself.

Baking powder, however, isn't alive, but chemical-based, a composition of inert dry acidic and alkaline substances. These interact when they're exposed to moisture, thereby producing the gas needed for the rise. Think of those vinegar and baking soda volcanoes from elementary school.

All commercially produced baking powders nowadays are "double-acting," which means they're engineered to produce two chemical reactions. The first is that moisture-activated acid and alkali interaction; the second is heat-activated.

Homemade baking powder is "single-acting" in that the initial moisture-activated reaction is the only one. It continues its work in the oven because the gas keeps expanding with the heat. Single acting powder will do its job more thoroughly if you let the finished dough rest for just a few minutes after it's cut and shaped.

To make half a cup, thoroughly combine 3 tablespoons cream of tartar (available in most markets and drug stores) with 2 tablespoons of baking soda and 3 tablespoons of rice flour or cornstarch as an anti-caking agent. Store it in an air-tight container and give it a good shake before measuring out the amount you need.

To make it "to order," you don't need the starchy filler. For every teaspoon of baking powder needed, combine a scant half teaspoon of cream of tartar with a slightly rounded quarter teaspoon of baking soda. Yes, that's not quite a teaspoon but the rest would've been filler. I confess I just shake what I need into the palm of my hand and eyeball it.

Now, on to the real business: using it. Homemade single-acting powder is far less intrusive and produces a much smoother-tasting product. It's especially nice for biscuits or scones that are made with heavy cream instead of cut-in cold fat and milk. And the lovely thing about cream biscuit dough is that it can be used for so many other things, like this:

While nothing quite equals cinnamon rolls made with a buttery yeast dough, cream biscuit dough doesn't have to be kneaded or proofed and takes just minutes from start to finish.

Traditionally, these rolls are finished with a sugar glaze, but I have one of the world's least developed sweet-tooths and find it a bit too much for my taste, so I prefer a light dusting of powdered sugar. If you like the glaze, a recipe for a simple one follows.

Makes 5-6, serving 3 to 6, depending on whether they're part of a larger meal

1/3-1/2 cup raisins or sweetened dried cranberries, or a combination of both

About 2 tablespoons softened salted or unsalted butter, plus more for the pan

1 cup (5 ounces) all-purpose flour, plus more for the pan

About 2/3 cup chilled heavy cream, plus about 2 teaspoons, for brushing the tops

1. Bring a kettle of water to a boil. Put the raisins in a small heatproof bowl and barely cover them with boiling water. Let them soak for at least ten minutes. Rub a 6-inch seasoned iron skillet or round cake pan with butter, sprinkle in 2-3 teaspoons of flour, and shake and tap the pan until all sides are lightly dusted with flour. Invert the pan and shake out any excess.

2. Whisk or sift together the flour, a small pinch of salt, the sugar, and baking powder. Lightly whip the cream until it's beginning to thicken (about the consistency of buttermilk). Gradually fold the cream into flour mixture until the dough is holding together and moist but not too sticky. You may not need all the cream but, depending on how dry the flour is, you might actually need 1-2 tablespoon more.

3. Lightly dust a work surface with flour. Turn the dough out onto it, lightly dust it with just enough flour to keep it from sticking to your hands, and pat out to a thickness of ½-inch. Fold it in half and again pat out until ½-inch thick. Repeat 3-4 more times and it pat out into a rectangle somewhat less than ½-inch thick and about 6 inches wide and 8-9 inches long.

4. Spread softened butter over the entire surface and generously sprinkle it with cinnamon sugar. Drain the raisins and toss them with a couple of teaspoons of flour, then scatter them over the dough. Beginning at one of the short ends, tightly roll it up to form a fat cylinder. Dip a large, very sharp cook's knife in flour and quickly cut the dough into 5-6 equal rounds. Lay them in the prepared pan, lightly touching, and set them aside for 10 minutes.

3. Meanwhile, position a rack in the center of oven and preheat it to 450° F. Brush the tops of the rolls with cream and sprinkle them with more cinnamon sugar. Bake until risen and golden brown, about 12-15 minutes. A cooking thermometer inserted into the center should register 210 degrees. Transfer the pan to a cooling rack and let cool slightly. Dust the top generously with powdered sugar or spread or drizzle them with the glaze. Serve them warm.

Cinnamon Sugar: In a 1 quart bowl, whisk together 1 cup of sugar and a heaped tablespoon of ground cinnamon. Transfer to a shaker with medium perforations in the top (not a screen). Keeps, covered and stored in a cool dry place, indefinitely.

Basic Sugar Glaze: In a medium mixing bowl, blend together 1 cup of powdered sugar with 1 tablespoon of softened butter and gradually whisk in about 2 teaspoons of whole milk until it forms a thick glaze. Add a few drops of vanilla extract or lemon juice, to taste. It can be spread with an icing spatula, drizzled, or piped through a pastry bag fitted with a small round tip.