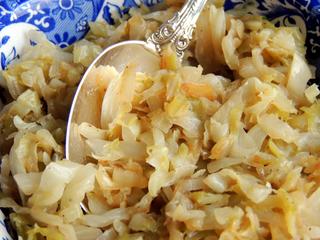 The middle of March marks an all-too-brief moment in the year when green cabbage, which gets so little attention the rest of the year, comes into its own and finally gets to share a bit of culinary lime light.

After months of being taken for granted slivered up in coleslaw or stewed with salt pork and languishing on the steam table of restaurants offering so-called "country" cooking, green cabbage finally gets to nestle up to that ubiquitous hunk of St. Patrick's Day corned beef and shine, if only for a day or two.

That wasn't always the case: back in the days when we all ate locally and seasonally, cabbage was one of the few green vegetables that was readily available in winter. Not only was it packed with salt and fermented into sauerkraut, its tight heads, nestled in straw and carefully stored in the cool of the root cellar, would keep until the first new greens of spring began to sprout.

It wasn't just stewed to death with salt pork or chipped up into slaw, either, but was prepared in all kinds of interesting ways: believe it or not, it was often cooked in wedges until barely tender and served simply dressed with melted butter. It might be cooked with onions and served as it came from the pan, or chopped, moistened with cream and perhaps bound with flour or crumbs, then molded into small cakes, coated with flour, and pan-fried.

There was also a lovely old dish known as cabbage pudding. The vegetable was blanched to make the leaves pliable, then the outer ones were folded back and its center was removed, chopped, and mixed into a savory stuffing with chopped meat, herbs, and breadcrumbs or rice. The outer leaves were replaced and it was tied up in a cloth, simmered in broth, and brought to the table looking like a whole cabbage.

It so impressed Thomas Jefferson that he copied out the recipe for the cooks at his beloved Monticello, but, having made it, I'll own that it's not something anyone is likely to want to attempt more than once in a season.

There is, however, one simple and particularly lovely old way of cooking cabbage that is well worth rediscovering and making often: a handsome dish that Lettice Bryan, author of The Kentucky Housewife (1839) called fried cabbage.

Don't be put off by the name: it isn't actually fried, but gently braised. In the end, the heat is raised briefly to evaporate the moisture and the cabbage is tossed until it surrenders its green for a mantle of pale gold. Its natural sweetness is concentrated and caramelized to a mellow, delicate flavor that's the perfect complement for roast poultry, pork, ham, or corned beef.

Mrs. Bryan's recipe verbatim: "Get a firm, white head, trim off the outer leaves, and cut the cabbage fine from the stalk; rinse it in cold water, put it into a pan with a very little water, salt, pepper, and enough lard or butter to season it well: cover the pan and fry it till it is done, raising the lid and stirring if frequently." (The Kentucky Housewife, 1839)

2 tablespoons lard or unsalted butter (bacon drippings may be substituted)

1. Pull off the tough, dark outer leaves of the cabbage and discard them or set aside for soup. Wash the cabbage under cold, running water and cut it in half lengthwise. Cut each half lengthwise in half, remove the core and slice each piece across into thin strips no more than a quarter of an inch wide.

2. Put the cabbage, fat, and water into a large, heavy-bottomed lidded skillet. Lightly season with salt and a grinding of pepper, cover tightly, and let it come to a boil over medium heat, stirring occasionally. Lower the heat to medium-low or low so that it's barely simmering, and cook slowly, still covered, but stirring from time to time, until it's very tender, about 30-45-minutes. If it gets too dry, add a few spoonfuls of water, but no more than is absolutely necessary.

3. Remove the lid and raise the heat to medium high. Cook, stirring almost constantly, until all the moisture is evaporated and the cabbage is pale gold, being careful not to let it scorch. Turn off the heat, taste and adjust the salt and pepper, and serve warm.

Variation: This is also delicious with an onion added. Trim and halve a large yellow or white onion, then peel and thinly-slice it. Add it to the pan with the cabbage and water in step 2.

The recipe and part of the text is adapted from Classical Southern Cooking, 2nd Edition, copyright © 2008 by Damon Lee Fowler, all rights reserved.