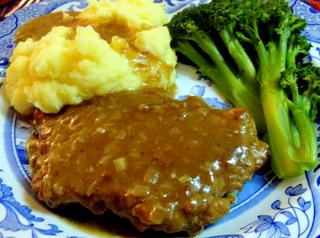 One of the best things about having a basic set of simple dishes that we turn to again and again is that they provide us with knowledge and skills that we don't even have to think about. So, when we're confronted with a new ingredient, once we understand its essence, we can automatically apply the knowledge and innate set of skills we already have, without having to dig out a recipe.

Recently, a recipe featured in my newspaper column called for a small amount of fresh pork. While shopping for it, I ran across cubed boneless pork steaks on sale, and found a package that contained just enough for the recipe with two nice-sized steaks that could be set aside for another meal.

I'd never cooked cubed pork steaks, but it didn't matter. Country-style steak in onion gravy, made with cubed beef steak, is a standard in my kitchen that I can all but make in my sleep. The cooking times for pork and beef can vary and their flavor profile is quite different, but once they'd been cubed, their reaction to cooking is pretty much the same.

The basic seasonings from country steak, salt, pepper, onion, and Worcestershire, would also have worked and been just fine. But the other thing that rote experience had made automatic is a knowledge of which seasonings marry well with pork, so sage and a little garlic joined those other flavors in the pan.

There wasn't an onion in the house but there were a couple of shallots at the bottom of the basket that needed to be used. Experience had taught me that those would work really well with pork, sage, and garlic. And so, without really having to think about it, something I'd never cooked before became a lovely dish that was at once new and reassuringly familiar.

1. Trim the pork of sinews and any excess fat. Season lightly on both sides with salt, pepper, and sage. Warm enough fat to film the bottom of a large, well-seasoned iron or heavy-bottomed skillet over medium heat. When it's melted and hot, lightly dust the pork with flour, shake off the excess, and slip them into the pan. Brown lightly, turning once or twice, about 2-3 minutes per side. Remove the pork to a plate or platter.

2. Add the shallots to the pan and sauté, stirring often, until they're softened and golden. Add the garlic and sauté, stirring constantly, until fragrant. Sprinkle in 2 tablespoons flour and stir until it's smooth. Slowly whisk in the broth and bring it to a simmer, stirring constantly, and simmer until thickened, about 3-4 minutes. Season with salt, pepper, sage, and a few dashes of Worcestershire sauce, all to taste. Stir well, and return the pork to the pan.

3. Bring it back to a boil and adjust the heat to a slow, lazy simmer, cover, and simmer until the pork is fork tender, about 1 hour. Longer won't hurt a thing. Taste and adjust the seasonings, and serve with hot rice or mashed potatoes.