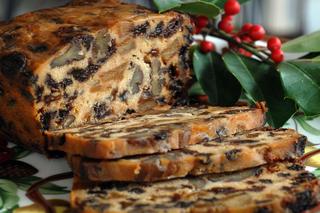 Then, rather abruptly, I stopped—and not because I got tired of it. Though writing is a fulfilling profession, few of us make a living at it; we have to have another income if we want to eat. I went back to work as a director of the cooking school in a retail kitchenware store.

Now, anyone who works in retail can tell you that from the beginning of October until the end of December (fruitcake baking season) there's little time for even simple baking, especially if one has another full-time job outside of that one. When I did have a moment at home, it was taken up with writing projects that were always behind schedule.

The business where I was working closed three years ago, but in the ensuing years, there have been too many things going on as I tried to revive the writing career and make ends meet—and, to be honest, nurse a bit of chronic depression.

But this year, my fruitcake baking alter-ego decided it had waited long enough. It gathered fruit and pecans, stockpiled butter, flour, bourbon, and sherry, and made me promise that there would be homemade fruitcake on this year's holiday table once again.

And so, it happened. Although I was a little late getting them made, they'll have two weeks to ripen before Christmas and be fit enough to share during the twelve days of the season.

Though the process is a little involved, and is spread out over three days, it really didn't take all that much of my time from cutting the peel from the oranges for candying through to sliding the pans into the oven. And as that rich, familiar aroma of Christmas once again filled my house and revived my spirits, I can tell you that it was worth every minute.

Unless you find a vendor who sells dried fruit in bulk, you'll face buying cherries, currants, and raisins in packaging that is no longer a full pound, so be sure to read the labels. If you don't have a kitchen scale, they're not expensive and will make it easier to measure out what you need from a second package to make up a pound. It'll also make all your baking easier.

But one of the good things about this cake is it's flexible: if you don't have a full pound of each fruit; and if there's one you can't find or don't care for, it really won't matter: you can leave it out or substitute another one. The cake might be a little more "cakey," and the fruit flavors may not be the same, but it'll still be lovely.

½ cup bourbon, plus more, for aging the cakes

1 pound (about 3½ cups) all-purpose flour, plus more for dusting the fruit and preparing the pans

1. Put the raisins, currants, and cherries in a heat-proof, non-reactive metal or glass bowl. Bring a teakettle full of water to a boil and pour it over the fruit. Let it stand for 10 minutes and drain thoroughly. Let it cool, add the candied orange peel and bourbon, and toss well. Cover and macerate at least an hour; 8 hours or overnight is better. The whiskey will be mostly absorbed.

2. When you're ready to make the cakes, position a rack in the center of the oven and preheat it to 325° F. Butter and flour 4 9-inch loaf pans, then shake out the excess flour into the next pan and repeat until all the pans are floured. Or butter the pans and line them with parchment paper, letting it come up the two long sides of each pan.

4. Lightly sprinkle the fruit with about ¼ cup of flour and toss until coated. Fold the fruit and pecans into the batter until all is uniformly distributed and spoon the batter evenly into the prepared pans. Smooth the tops with a spatula and firmly tap them on the counter several times to force any air bubbles to the surface.

5. Bake in the center of the oven, not touching one another, for 1 hour without opening the oven door, then check the cakes, turning them if they're not browning evenly, and continue baking until a straw or bamboo skewer stuck into the center comes out clean, about 1½ hours altogether. Remove them to a wire cooling rack and let them cool completely before removing the cakes from their pans.

6. Wrap each cake separately in un-dyed muslin or in several layers of cheesecloth. Sprinkle with bourbon until the cloth is saturated, then separately wrap each cake tightly in plastic wrap. Put them in an airtight tin or zipper-locking storage bag and let them ripen for at least 2 weeks before cutting them.

I always ripen fruitcake in the refrigerator; fruitcakes slice more neatly when cold. Slice it with a very sharp, damp knife (fruitcake cuts cleaner with a regular knife rather than a serrated one).

Portions of this essay and recipe are adapted from Essentials of Southern Cooking, copyright © 2013 by Damon Lee Fowler, all rights reserved.