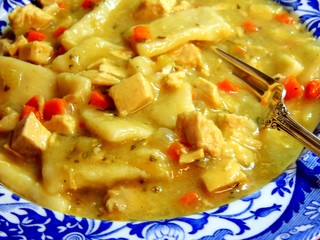 MaMa's Dumplings, My Broth. Heaven in a Bowl

Well, it only took close on to sixty years to accomplish it, but I think I've finally mastered one of my favorite dishes from childhood: my maternal grandmother's dumplings.

MaMa made broad, flat noodle-like dumplings that are sometimes called "slipperies," and the broth in which she simmered them depended on the time of year, what she had on hand, and her mood. Even when rolled flat, the dough is similar to biscuits, with exactly the same ingredients—flour, salt, baking powder, shortening of some kind, and milk.

My mistake lay in the assumption that it was exactly the same as biscuits, partly because I remembered MaMa mixing them both in the same way, and partly because, later in life, she stopped making her own dumplings and started using canned biscuits rolled thin. By the time it occurred to me to try to get her recipe, she couldn't make them anymore, nor remember how she'd done it, and I was on my own.

All my attempts at making dumplings were therefore basically my biscuit dough rolled as thin as I could manage. But while they were delicious, they puffed up far too much and were so delicate that they tended to fall apart. That pointed to too much leavening, and a little research and experimenting confirmed it.

But that wasn't the only problem: the other was that I was treating it like biscuit dough, which would've been fine for round dumplings, but not for this kind. Flat dumpling dough can't be kneaded as vigorously as pasta or yeast-leavened bread dough, but it still needed more kneading than the gentle pat and fold thing I'd been doing all these years.

Well, research and a sound grasp of theory are both important, but when it comes to cooking, in the end, the proof, as the old saying goes, is in the pudding. I tied on an apron, made a batch of rich chicken broth, got out the flour, and went to work. As soon as the first noodle hit the simmering broth and lightly puffed, but held its distinctly flat, noodle-like shape, my hopes rose. But I kept those hopes in check until the first dumpling touched my lips.

And with that first bite came a flood of some of the very best memories from my childhood. By George, I think I've got it.

It didn't matter what kind of broth she used to cook them, MaMa's dumplings were always the same. It was the broth that made each batch unique. Her seasonings were spare. But then, that broth was always homemade, and rich with the flavor of the seasoning meat, so it really didn't need a lot of added stuff.

She never added carrots and celery and seasoned the broth only with onion, salt, and pepper. And I don't think there were ever many herbs in her kitchen other than sage and the occasional bay leaf—and neither one went into the dumpling pot. Nonetheless, I like adding diced carrots and celery to mine, and season the broth with a generous grating of nutmeg and always add chopped fresh herbs—usually sage and sometimes thyme—and if it's chicken broth, I also add a good bit of freshly grated ginger.

The onion, carrot, and celery that go into the finished broth are sautéed in butter, but that can also be done with the same quantity of the fat that congeals on top of the broth. Of course, you don't have to sauté the vegetables at all, and can omit the fat altogether, adding them directly to the already boiling broth if you're trying to make it a bit lighter.

2 tablespoons unsalted butter or fat from broth (see notes above)

Whole nutmeg in a grater, optional

For finishing and serving the dumplings:

1. Put the fat and onion in a heavy-bottomed pot over medium heat. Sauté, stirring often, until it's beginning to soften and is translucent but not colored, about 3-4 minutes. If using them, add the carrots and celery and sauté, stirring often, until beginning to soften. Add the broth and herbs (if using) and season well with salt and pepper and if liked, a few gratings of nutmeg and freshly grated ginger root, both to taste. Bring it to a simmer and let it simmer while you make the dumplings.

2. Sift or whisk together the flour, baking powder, and salt in a mixing bowl. Cut in the lard or shortening with a pastry blender (or two knives) until it resembles coarse corn meal. Make a well in the center of the flour and pour in about 2/3 of the milk. Mix it into the dry ingredients, adding more milk as needed, until the dough is cohesive and soft but not too wet and sticky.

3. Lightly flour a smooth work surface and turn the dough out onto it. Flour your hands and gently knead the dough until it is just smooth—about 4-5 turns. Shape it into a disk and let it rest 5-10 minutes.

4. Meanwhile, add the diced, chopped, or shredded meat to the broth and let it come back to a simmer. Simmer while the dough is resting until the meat is heated through. Dust the work surface and the dough with more flour and roll it out as you would a pie crust 1/8-inch thick. Cut into 1-inch wide strips and cut the strips into 2-3-inch lengths to suit your own tastes. Some like longer dumplings and some short ones.

5. Drop the dumplings into the simmering broth a few at a time. Simmer about 12-15 minutes, or until the dumplings are cooked through and tender. Ladle them into individual soup plates or deep bowls, sprinkle with parsley, if using, and serve at once.