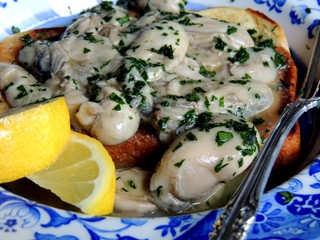 As Savannah's weather begins to moderate and our season for oysters opens, it seems like a very good time to revisit an old local favorite, Panned Oysters. There may be other ways of preparing oysters that are as good, but short of forcing a live oyster open and slurping it without ceremony right out of its shell, none can top it for flavor or surpass its elegant simplicity.

It's nothing more than shucked oysters simmered in their own liquor, usually with a knob of butter added for richness, until they're plumped, just heated through, and their gills have curled. They're then seasoned only as much as is needed to bring out their naturally briny flavor.

When I first came to Savannah, Panned Oysters were well-loved to the point of almost being taken for granted. "All men love this," wrote one local matron in a mid-twentieth-century charitable fund-raiser cookbook, but its popularity really wasn't limited by gender.

While it is almost impossible to pin down its exact origins, when Harriett Ross Colquitt, sister of legendary Savannah historic preservation pioneer Anna Colquitt Hunter, shared the recipe in her iconic The Savannah Cook Book in 1933, her off-hand treatment suggested that it had long been a standard in local kitchens.

Simmering shucked oysters in their own liquor probably goes back to the very beginnings of cookery and can be found again and again in early English and American cookbooks as the first step for oyster soup or creamed or stewed oysters.

Those recipes didn't stop at the poaching, but added thickeners and other enrichments—a handful of soft breadcrumbs, flour mixed with butter, a bit of cream. But as those old authors would have put it, "to have this dish in perfection" wise cooks will use care in what they add.

Don't let its simplicity tempt you to over-embellish: Once the rich, briny essence of the oysters has been brought to the fore by the least amount of seasonings, anything else will just get in the way—not to mention make more work than it will be worth.

In describing this dish in his Time-Life Foods of the World volume American Cooking: Southern Style, Eugene Walter related a charming trick that he learned from the late Mary Aiken, wife of Savannah's mid-twentieth-century poet laureate Conrad Aiken. Mrs. Aiken stirred the oysters with her bare forefinger: When the liquor became too hot for her to keep her finger in the pan, the oysters were done.

You may use a spoon and watchful eye instead.

1. Drain the oysters in a wire mesh sieve set over a bowl for at least 15 minutes, reserving the liquor. Meanwhile, toast the bread, lightly butter one side, and keep it warm.

2. Warm 2 tablespoons of butter in shallow, heavy-bottomed pan over medium heat. When it's barely melted, add the oysters and enough of their liquor to half cover them. Cook, stirring constantly, until their gills curl, about 2 minutes. Season with Worcestershire, hot sauce, and pepper. Remove the pan from the heat, taste, and adjust the seasonings, adding salt if needed (local oysters won't need it). Some cooks add another pat of butter and shake the pan until the butter has dissolved into the liquor.

3. Put the toast buttered side up in warmed rimmed soup bowls. Spoon the oysters and their juices evenly over the toast, sprinkle with parsley, garnish with lemon wedges, and serve immediately.