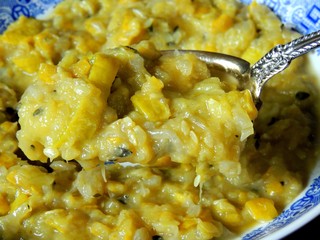 MaMa's Country-Style Creamed Summer Squash, with my bit of fresh thyme thrown in, a quintessential taste of her summer table

More on the skillet steamed squash from the last essay of that name.

The method was the one my maternal grandmother, known to us as MaMa, used to cook the sweet, young yellow crooknecks from my grandfather's garden throughout the summer, although she did it in a deeper saucepan rather than the skillet I use nowadays.

But while she did sometimes bring them to the table whole, she more often took them one step further and creamed them.

Creaming in this instance doesn't necessarily mean that they're doused with cream, although one could, but rather that they're mashed (as in creamed potatoes) and enriched with some kind of fat, in this case butter.

If I had to describe MaMa's summer table in one taste, this would be it.

An unorthodox way of serving this that my grandmother never tried is as a delightful sauce for pasta, although she might've done it had it been suggested to her—she was an adventurous, curious cook to the day she laid down her spoon for the last time. Choose a short, craggy pasta that will hold the little bits of squash. Orecchiette, fusilli, rotini, penne, or elbows are all excellent choices. This will sauce about 1½ pounds of pasta, serving six to eight.

Before you begin, have a look at the previous essay from 12 July 2019: Skillet Steamed Summer Squash.

1. Scrub the squash gently under cold running water, drain, and pat them dry. Trim the stem and blossom ends, then slice them crosswise into rounds about ¼-inch-thick. Trim the root and stem end of the onion, halve it lengthwise, peel, and thinly slice each half. Separate them into half-moon strips.

2. Prepare the squash and onions following the recipe for Skillet-Steamed Summer Squash from the 12 July 2019 post of that name, adding the optional thyme if liked.

3. When the squash are tender (easily pierced with fork), remove the lid and raise the heat. Cook, stirring often, until the moisture is almost completely evaporated. Turn off the heat and add 1-2 tablespoons of butter. Using a potato masher, roughly crush the squash, mixing until the butter is melted into them. Stir in another tablespoon of butter and serve immediately.