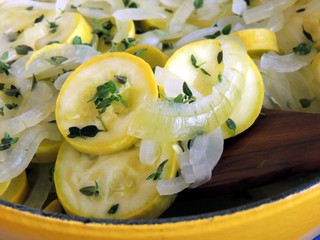 Summer squash of all kinds are a staple in my kitchen throughout the season. There are almost always a few yellow crooknecks or zucchini (or both) in the refrigerator's vegetable bin and often a tub of cooked leftovers right next to the tub of pimiento cheese.

More often than not, they're simply cooked by steaming them in their own juices, a method I included in a recent column for the newspaper. It's basically how my grandmother used to cook them, with a few touches of my own added through the years, and is very simple, requiring next to no skill and only a very little attention from the cook. And it works for any summer squash, though it's especially nice for our sweet yellow crooknecks.

But while it's simple, there were nuances and details that couldn't be included in the limited space of a print medium, so I wanted to share those extra bits here.

My grandmother added a little water to the pan to keep the squash from drying out and scorching on the bottom, but I've learned that they don't need added moisture if they're seasoned with salt as they're layered with the onions, then left to sit for a few minutes so that their abundant moisture is drawn out by the salt. They'll lose more moisture as they cook, so there should be no need to replenish it by adding water to the pan so long as the heat is kept at a moderate level.

Like most simple things in the kitchen, success with this depends on the best ingredients you can get. Which means that, unless you grow your own, you'll need get them from a vendor that you know to carry local produce that's only a couple of days from harvest. Shop community farmers' markets and small vendors who sell only fresh, local produce.

Here's what to look for.

With summer squash, regardless of the type, smaller is better. The best crooknecks have very slender "necks" and "bodies" less than 2½ inches in diameter. Their skins will be smooth, taut, glossy, and firm but delicate, easily pierced with a fingernail. (But don't spoil the vendor's stock by gouging it: you'll be able to tell if it's tender and delicate just by lightly running a finger over it.) Their color will be a fresh, sunny yellow and their stems, a fresh bright green.

Pass over squash that are large and have a rough, "warty," and thick skin colored a deep yellow that tends toward orange: They're too mature and not only won't be tender but might even be bitter. Likewise avoid small ones that look dull and washed out, whose stems are yellow, almost white, or withered and brown: they're not fresh and will have lost a good bit of flavor.

The delicate skin will blemish easily, so by the time they get to market, a scratch or scrape or two is inevitable, but a heavily mottled surface with a lot of brown scars and scrapes is a surface that has been roughly handled, which means that the inside flesh is likely to be damaged.

The seeds should be small and underdeveloped – as Lettice Bryan put it in The Kentucky Housewife back in 1839, no more than tiny blisters. You won't be able to check for that in the market, but if you select small squash with all the above attributes, the seeds will be as they should be.

Cook them as soon as you can after you've bought them: remember, they've already been separated from the plant for several days and, while it's not noticeable for a day or so, deterioration actually begins the moment the stem is cut.

The high water content of Vidalia Sweet onions works to the cook's advantage here, lending its flavorful moisture for steaming both itself and the squash. The key is to let the squash and onions to sit for a few minutes after they're layered in the pan to allow the salt to draw their moisture.

The thyme is my addition: My grandmother didn't grow or use it except when it was included in the powdered herb blend marketed as poultry seasoning. But it makes a lovely pairing with yellow squash. You can omit it or try another herb such as oregano, sage, or summer savory.

1. Gently scrub the squash with a vegetable brush under cold running water and let them drain. Trim the stem and blossom ends, then slice them crosswise into ¼-inch-thick rounds. Trim the root and stem of the onion, halve it lengthwise, peel, and thinly slice it.

2. Cover the bottom of a heavy-bottomed 9-10-inch skillet with a third of the onion. Cover it with half the squash and lightly sprinkle them with salt. If you're using thyme, sprinkle some of it over the squash, to taste. Top with another third of the onion, then the remaining squash slices. Sprinkle that layer with salt, thyme (if using), and cover with the remainder of the onion. Cover the pan and leave it for at least 10-15 minutes.

3. Put the covered pan over medium heat. When the moisture begins to bubble, reduce the heat to medium-low and cook, checking occasionally to make sure moisture doesn't completely evaporate, until squash are tender when pierced with fork. The pan isn't likely to get dry, but if it does, add a splash of water. Serve hot, warm, or at room temperature.