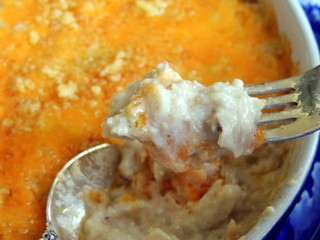 Lowcountry Crab Au Gratin, my first taste of the grand cuisine of Old Savannah, the place I have called home for four decades.

This week marks the beginning of my fortieth year in Savannah, Georgia's oldest city and its colonial capitol. Four decades of changed professions, loves lost and loves found, and learning to live with and cook in eight different kitchens. I never imagined that nearly two thirds of my life was destined to pass here.

I also never imagined crowning those four decades with moving. Twice. In two different directions—and within the space of not quite two months.

I cannot recommend it.

It all began innocently enough. For several years, we've admired a charming Federal-Revival house in Petersburg, Virginia, where Timothy grew up. Though built in 1942 and wearing a sad mantle of neglect from not having been lived in for several years, it was in remarkably good condition. Every time we visited family, we'd go by, admire its undimmable charm, grieve over its neglect, speculate about what its interior might be like, and daydream of what fun it would be to save it and bring it back to life.

But that was all it was: a daydream. If nothing else, it was four hundred and fifty miles from where we live. While our hope was to retire to Virginia to be closer to family, retirement was several years in our future. And so, charming though the house was, it seemed highly unlikely that it would be we who would rescue it.

The house, however, seems to have had other ideas. It kept working its charm on us. And last fall, it abruptly went on the market just when we were planning to go up for the funeral of an old friend. Thinking there was no harm in looking, we made an appointment to see it, and on a cold, wet November afternoon, finally crossed its threshold for the first time.

It was chilly, damp, dim, cluttered, and dirty—and just about as sad as a house could possibly be. But neglect and tarnish had not diminished its charm, although it did diminish its asking price. We were smitten. No, more like bewitched. And although retirement was several years in the future, we knew we couldn't let this chance pass us by, and bought it.

At last that daydream had become real. We were thrilled. But elation quickly turned to panic. What on earth had we been thinking? What were we going to do with a house so far away from where we lived? Since we had no plans to leave Savannah—and didn't yet want to, we finally made the hard decision to downsize here and keep the house as a second home until we retired. It'll be fun, we told ourselves. Sure.

What it was was frustrating, nerve-wracking, and all-consuming. But time does march on, and while we often think of that march as our enemy, its positive gift is that even our worst moments pass. We're finally settling in to a cozy townhouse in Savannah and the refurbishing of our vacation getaway house in Virginia is nearing completion.

A bonus of that settling in is that I now enjoy having two kitchens that both work. I'd started this adventure with one that was only marginally workable. For a time in the worst of it I had not two, but three kitchens that were barely usable at all, which is why this page has been lacking in both recipes and stories. But as I adjust to the luxury of two reasonably workable kitchens and begin to get back into a rhythm of cooking and writing about it, the irony that this new chapter is opening on the anniversary of my first crossing of the old Talmadge Bridge is not lost on me.

And as I reflect on four decades of living in and loving this lovely old city,  I am well aware of the apparent irony that I came here to pursue a career in architecture and preservation only to get detoured into a career of writing about food. The truth, however, is that there's nothing ironic about it: For while it was indeed Savannah's architecture that beguiled and lured me here, it was its cuisine that made me fall in love and stay.

So, maybe—just maybe—that old saying about the way to a man's heart being through his stomach has more truth in it than we allow.

My first meal in Savannah on that stiflingly hot early June afternoon was a solitary lunch of crab au gratin, something I'd never had before. It came to the table still bubbling from the oven, its gilded blanket of toasted cheddar concealing succulent local blue crab meat bound in a thick, creamy sauce laced with sherry, shallots, and a hint of cayenne pepper. It was one of the first Savannah dishes I learned to make and has remained a lifelong favorite.

3 cups light cream or half and half

Whole nutmeg in a grater

1. Pick over the crabmeat for any lingering bits of shell and cartilage and discard them.

2. Put 3 tablespoons of butter and the shallots in a heavy-bottomed pan over medium heat. Sauté, stirring almost constantly, until the shallots are softened but not colored, about 3-4 minutes. Sprinkle in the flour and cook, stirring constantly, 1 minute.

3. Slowly stir in the cream and bring it to a simmer, stirring constantly, then reduce the heat to medium low and cook, stirring, until thick, about 3 minutes. Add the sherry, return to simmer, and turn off heat.

4. Position a rack in the upper third of the oven and preheat it to 400° F. Lightly butter 4 6-inch gratin dishes or a 1½-to-2-quart gratin or shallow casserole. Fold the crab and Parmigiano into the sauce. Season it to taste with salt, cayenne, and nutmeg and divide it among the prepared gratins or pour it into the casserole. Level the tops with a spatula.

5. Melt the remaining teaspoon of butter in a small skillet over low heat. Stir in the cracker crumbs and toss until the butter is evenly absorbed. Turn off the heat. Sprinkle the cheddar evenly over top of the gratins or casserole and top with crumbs. Bake until bubbly and the cheese is melted, about 15 to 20 minutes. Serve hot.

Love this recipe! It’s very similar to one I have used for years from the original Charleston cookbook called “Meeting Street Crabmeat,” served in large scallop shells. Have really enjoyed your tales of restoration of the Virginia house......was especially tickled by a phrase you used to describe the appearance of the house built in 1942....my birth year....too often these days I feel as though I am “wearing a sad mantle of neglect.” LOL

Goodness, I feel like I've been swept off my feet. I've missed your stories, and I'm glad you're back. And, I love the confirmation that perhaps I'm not the only one who feels that special homes, or buildings can call you out, and pull you in. Much love, and happy excitement for you and Timothy.

Thank you both so much for reading and taking the time to let me know you enjoyed it!

After having read your story about the house, I realized what it reminds me of! The house in Miracle on 34th Street! Have you found a walking stick in the corner anywhere? Also, for me, your crab recipe would only serve one! And that would be me! When I lived in Montreal, we used to go to a crepe restaurant that served Crepes St. Jacques - that had scallops and crab in just that sauce. I loved it and the recipe brings to mind cold winter walks, frosted noses and my glasses fogging over whenever I walked into a building!

Thank you so much, Monica! We didn't find a walking stick in the corner, but there was one (complete with a bicycle horn and small rear view mirror) left in the stairwell down to the garage. This sauce is pretty rich. We had it last night and the gratins I used were larger than called for, so it only filled three of them . . . and it was too rich for us to eat a full gratin apiece. But I wanted to!