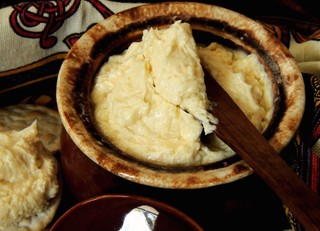 For most of us Southerners (I suspect, Americans in general) it would not be Easter without deviled eggs, but it’s always nice to have an extra nibble or two in case dinner is delayed by the roast or by a long-winded Easter sermon.

This lovely potted cheese is from one of my newspaper columns on traditional Irish fare for Savannah’s notorious St. Patrick’s Day celebration, but potted whiskey cheese is also found in England and Scotland and here in the South, where it’s usually made with bourbon.

You can make this with extra-sharp white cheddar and European-style butter other than Kerrygold from Ireland, but only that cheese and butter will lend the flavor and rich, creamy texture that makes this worth having . . . and they’re not paying me to say so. There are some very nice American white cheddars from New England and Wisconsin that will also work handsomely.
Some contemporary recipes for potted cheese add minced scallions. It does brighten and freshen the flavor and will lend that requisite bit of Irish green to it, but unfortunately it also shortens its shelf-life. If you choose to add scallions, wait until just before serving to do so.
Without the scallions, potted whiskey cheese will keep for weeks, if not months, well-covered in the refrigerator. Once you add them, use it up within a couple of days.

1. Combine the cheese, butter, and mustard in the bowl of a food processor fitted with the steel blade and process until smooth. Or combine in a mixing bowl and whip with an electric mixer at medium-high speed until smooth.

2. Whip in the whiskey a tablespoon at a time. Taste and adjust the salt, adding a tiny pinch or two as needed. Transfer to a crock, cover, and let it sit at least 1 hour or refrigerate if made more than a few hours ahead. Let warm to room temperature at least 1 hour before serving.

3. If liked, just before serving, fold in the scallions and stir until evenly mixed. Serve with crackers of your choice.