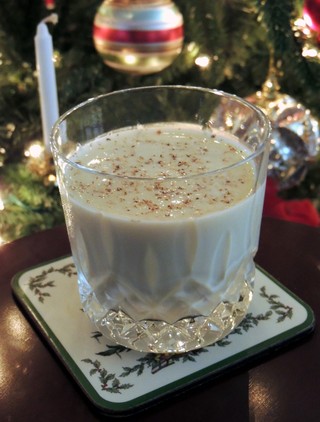 Every year when the winter holidays roll around, I begin to crave that old-fashioned Southern holiday treat, drinking custard. Eggnog, at least, the real thing laced with bourbon or brandy, wasn’t something we had in a Baptist pastorium. But drinking custard was another thing. We could enjoy it not only at Christmas, but throughout the cold season.

If you’ve not encountered it, drinking custard is the same thing as custard sauce, only made with fewer egg yolks or whole eggs so that it’s thin enough to sip from a cup the way you’d do eggnog. For many Southern families, it was and still is a long standing holiday tradition and is actually the base that is often used for eggnog, especially if it contains no alcohol.

Mama used to tell stories of the days when my father was in seminary in Louisville and pastored a small country church in a northeastern Kentucky farming community. It was before I was born: there was only Dad, Mama, and my older brother, Earle, who was then a precocious toddler who could charm the socks off of anybody. Dad was at school most of the week, so the ladies in the community spoiled my brother (and truth be told, my mother) absolutely rotten.

The people in the church didn’t have a lot of money, but were very generous with food and treats for their young preacher and his family. After they found out how much Earle loved custard, nearly every Sunday morning throughout the winters that they were there, the back screen door would squeak, bang shut, and there would be a still-warm quart jar of custard tucked between the screen and kitchen door.

The years passed; my Dad finished school and they left Kentucky; my little brother and I came along. And through it all, custard was a steady family theme. On many a cold winter evening, we’d be getting ready for bed and hear a welcome clang of a pot being taken from the cupboard, closely followed by the steady click of a fork against a mixing bowl as eggs and sugar were whipped together. Next would come the steady scraping of a wooden spoon against the bottom of the pan and the warm fragrance of hot milk and vanilla wafted beguilingly up the stairs.

She’d call us (as if she needed to) and we’d clamber down. She gave it to us in cups, but since it was too hot to sip, we’d eagerly put it away with a spoon until it had cooled enough to turn it up and drain it. Sometimes—not often—there would be enough to have cold the next day.

As the winter holidays close in, even when the custard has come from a bottle in the grocer’s milk cooler and is icy cold, that smell, that taste, still brings my mother close in my imagination, and comforts as nothing else can do.

Makes a little over 1 quart

1. If you don’t have a really thick-bottomed copper- or aluminum-core 2-3-quart saucepan, prepare the bottom pan of a 2-3-quart double boiler with simmering water over medium heat. Over direct medium heat, bring the milk and vanilla bean to a bare simmer in the thick-bottomed pan or top pan of the double boiler. If you’re using the heavy pan, lower the heat to medium-low or put the double-boiler top pan over the pan of simmering water. Let it simmer 3-4 minutes.

2. In heatproof bowl, beat together the sugar and egg yolks until it’s light and smooth and runs off the spoon in ribbons. Slowly whisk in 1½ cups of the hot milk, then slowly whisk it into the remaining hot milk.

3. Cook, stirring constantly with a wooden or metal spoon (not silicone), until it thickly coats the back of the spoon, about 3-5 minutes. Remove the custard from the heat (if using a double boiler, remove it from over the hot water) and stir until cooled slightly, about 3-4 minutes. Remove the vanilla bean, rinse it, and pat it dry, then leave to air dry. It can be reused about twice more.

4. Drinking custard can actually be served as a hot beverage, or you can let it cool completely, cover, and chill it to serve cold as you would eggnog. If you like you may stir a spoonful of whiskey into each serving and top it with a sprinkling of freshly grated nutmeg.

What a beautiful account!
I want to comment on "the steady click of the fork" and "the steady scraping of the wooden spoon" and "the pan." I remember the uncomplicated kitchens of my youth, with none of the complications and elaborations we feel like are necessary. In my youth the fork was steel, with a wooden handle, and no bigger than a table fork. There were two wooden spoons. And the pan was aluminum. There were no whisks or copper bowls or copper pots, but there was the wonderful expertise that produced the superb cooking we remember.

I used to say in interviews while promoting my first cookbook: "If I have a well-seasoned cast iron skillet and a sharp knife, I can cook just about anything." The people always looked at me as if I had two heads. But I do feel blessed by my handy whisk and good pots.