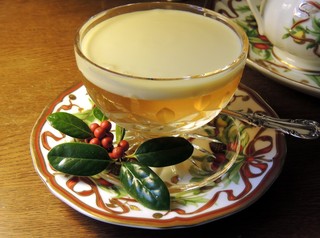 The dessert in the Christmas dinner that was shared in my last column was a lovely, old-fashioned thing called wine jelly. It’s not jelly as in a spread for toast, but jelly as in the stuff invalids are often fed when they’ve been off a solid diet.

It was once a classic old holiday treat that was actually rare and special, a fact we can’t really appreciate today, since sweet, flavored gelatin has lost a lot of its luster, thanks in large part to that stuff we feed convalescents. It’s a shame, really, because it’s a lovely, light dessert that adds sparkle—both literally and figuratively—to a holiday meal, and deserves to be popular again.

To appreciate why this was such a rare treat for our ancestors, it’s useful to know how it was made before gelatin showed up in our kitchens as a packet of powder.

First, one procured calves feet, pig or lamb trotters, or the knuckle joints from any of those animals—cuts that are abundant with natural gelatin. The color that one needed the jelly to be determined which kind: Pig’s feet jelly is the most colorless; veal jelly is next to it in color but firmer in texture; lamb jelly is a lovely amber. At any rate, whatever the joints, they were scrubbed cleaned, scraped well, and simmered in water for no less than two to three hours, more, if it could be managed. The liquid was cooled, strained, and left in a cold place overnight.

The next day, the fat that had congealed on top was carefully removed, the jelly was brought to a boil once again, and simmered to concentrate it—how much depended on how stiff one needed the jelly to be and whether or not it was mixed with another liquid like wine or fruit juice. Then it was clarified and put through a bag of tightly-woven muslin to catch any impurities that might be left so that the finished product would be sparkling clear.

After that, it was heated yet again sugar and aromatic flavorings, mixed with a fortified wine such as sherry or madeira, strained yet again, and finally poured into a prepared jelly mold or individual jelly glasses (footed crystal dishes shaped like a trumpet).

It was a three day process and the product of that process was not something to be taken lightly.

Although powdered gelatin is a far cry from the delicate texture of the one described above, it takes all of 15 minutes to make it, and it can still be pretty good and not in the least rubbery if you don’t use too much of it. Served in cut crystal with a rich homemade custard sauce poured over the top, it makes a festive, sumptuous and yet light finish to any holiday meal.

Some cooks add food coloring or use a red flavored gelatin instead of the unflavored gelatin and sugar so that it’ll be a festive color. I’ve never done it and don’t plan to start: if you really want it to be red, try using ruby port.

It can be set it in a jelly mold (rub the inside lightly with mayonnaise before adding the still liquid jelly), divide it among old-fashioned jelly glasses (footed, trumpet-shaped crystal things – not those glasses that had preserves in them), champagne or sherbet glasses, or simply pour it into one big bowl, let it set, and then scoop it out into individual dessert dishes for serving.

1. Using a vegetable peeler, remove the zest from half of a large or all of a small lemon in 2-3 pieces. Halve and juice the lemons through strainer. Bring 2 cups of water, the zest, and the cinnamon sticks to a boil in a small saucepan. Adjust the heat to medium-low and simmer 5 minutes.

2. Meanwhile, dissolve the gelatin in remaining ¼ cup cold water and let it soften 5 minutes. Add the sugar to the simmering water and stir until dissolved. Turn off heat. Add the softened gelatin and stir well, making sure that the gelatin completely dissolves. Let it cool.

3. Remove the cinnamon and stir in the sherry and 2 tablespoons of lemon juice. Taste and adjust the lemon juice, stir well, and pour it into individual glass or crystal dishes such as champagne glasses or, if you happen to have them, those trumpet-shaped jelly glasses. Refrigerate until set, about 4 hours. Serve with Bourbon Custard poured over each, or pass the custard in a pitcher so guests can do it themselves.

In the South we call this “boiled custard,” but the rest of the world uses its French name “Creme Anglaise” (English cream). It can be made days ahead. In many parts of the South, it’s a holiday essential, and is even served as a festive beverage in the place of eggnog.
Makes about 2½ cups

1. If you don’t have a really heavy-bottomed saucepan with a copper or aluminum core, prepare the bottom pan of a double boiler with simmering water. Over direct medium heat, scald milk and vanilla bean in the above-described pan or top pan of a double boiler, bringing it just under the boiling point. When it’s almost boiling, if you’re using the heavy pan, lower the heat to medium-low or put the double-boiler top pan over the pan of simmering water.

2. In heatproof bowl, beat together the sugar and egg yolks until it’s light and smooth and runs off the spoon in ribbons. Slowly beat in 1 cup of the hot milk, then slowly beat into the remaining hot milk.

3. Cook, stirring constantly with a wooden or metal spoon (not silicone), until it thickly coats the back of the spoon, about 3-5 minutes. Remove the custard from the heat (if using a double boiler, remove it from its bottom pan) and stir until cooled slightly, about 4 minutes more. Remove the vanilla bean (it can be rinsed well, dried, and reused a couple of times) and stir in the bourbon. Let it cool completely, cover, and chill before serving.

Thank you for this post! In recent years I'd forgotten how I used to make wine jelly with soft custard. I'd gotten the recipe from my mother-in-law, who gave me her folded Chalmer's Gelatine insert with 5 recipes. I still have it. ([tch] -Sure wish I knew WHERE I have it, though. It's been buried for 30-something years and hasn't yet resurfaced.) -A wonderful curiosity for me was reading that after preparing the gelatin, that the brochure instructions said to put in on ice. "Hummm... curious." The 1970s me couldn't see why I needed to do that ...so I just put it in the refrigerator. It was another couple of years before I thought of it again, and realized just how old this Chalmer's Gelatine package insert was, that it was before the standard use of electric refrigerators rather than iceboxes.
Of note, one of the other recipes in that Chalmer's Gelatine insert was one for Tomato Aspic.

Thank you so much for sharing this and for reading! It warms my heart and reassures me when I know that I've touched someone else with a story. Blessings!