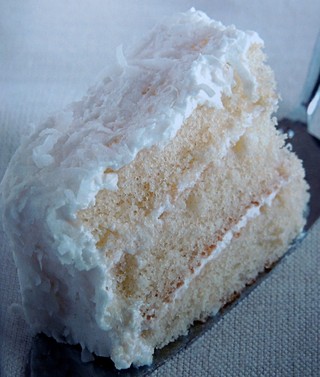 Hers was one the most extraordinarily moist cakes I’ve ever had. The great secret for its moistness is also the reason it tasted more intensely of coconut than any other. Lightly sweetened fresh coconut juice bathes every layer before it is frosted and topped with freshly grated coconut. Except for briefly heating the juice to melt the sugar, no part of the coconut is cooked, so the flavor isn’t diluted or blunted by heat. Don’t even consider writing to ask me if you can use a package or can of coconut instead of a fresh nut. Even my grandmother, the queen of packaged gelatin salad, would never use those.

She made it every Christmas but one. That was the year she decided we’d never know the difference and bought one from a bakery. Granddaddy told her we wouldn’t like it, but MaMa, with her typical modesty, didn’t think there was anything special about her cake. The one from the bakery looked like hers, so they conspired to say nothing of its origins. When it was cut and passed it around, my older brother quietly, thoughtfully, ate his portion and then announced: “Well, it was alright, I guess, but it wasn’t MaMa’s.” He, who loved coconut cake best of all, refused to eat any more of the impostor.

She never tried to fool us again.

Where this recipe came from, MaMa no longer remembered, though from my research it appears to have been a regional practice centered in North Georgia, East Tennessee, and the western Carolinas. As I mentioned before, my paternal grandmother made the same cake, though, God rest her, not with the same finesse.

Choose a coconut that sloshes happily when you shake it. There must be juice and plenty of it.

1 Plain, or 1-2-3-4 Cake, baked in three layers (recipe follows)
1 medium fresh coconut, with juice
2-3 tablespoons granulated sugar
1 recipe of Seven-Minute, or Boiled Icing (recipe follows), made at the stage indicated below, not ahead of time

1. Make the cake according to the recipe, and while it is baking, pierce the holes that make a little face on one end of the coconut with an ice pick or other pointed object such as a screwdriver, tapping with a hammer (sit down and hold the nut between your knees). Drain the nut through a wire sieve into a bowl, shaking it gently to get out all the juice.

2. This step must be done on a concrete floor or brick-paved patio or door stoop. It will crack tile that is laid over wood and permanently damage countertops. Lay the coconut on its side, steadily and firmly tap its equator with a hammer, rolling the nut, until it cracks and splits in half.

3. Take up one half and, armed with a wide, sturdy blade such as an oyster knife, pry loose the meat from the shell. It will pop off in pieces. Try to keep the pieces large, especially if you are using a hand grater to grate it.

4. Remove the brown skin with a vegetable peeler or paring knife, and grate the nutmeat into a large bowl. I use a rotary cheese grater, but a regular grater will work fine. You may also use a food processor fitted with a fine grating blade, following the manufacturer’s instructions.

5. Measure the reserved coconut juice. If there’s less than a cup, add enough water to make up the difference. Put it in a heavy-bottomed saucepan with 2 or 3 tablespoons of sugar, more or less, to taste. Heat it over a medium low heat, stirring occasionally, until the sugar has just dissolved. Don’t let it boil. Set it aside to cool while you make the frosting.

6. Invert a cake layer over a cake plate to carefully remove the pan. Slowly spoon ¼ cup of the coconut juice over it. Gently spread it with a thin layer of frosting, being careful; the cake surface tears easily when the frosting is worked too much. Sprinkle ¼ of the coconut evenly over it and invert the second layer over it. Spoon another ¼ cup plus a tablespoon of juice over this layer (since the liquid seeps to the bottom, adding a little more to each layer will evenly baste the cake). Spread this layer with icing and another ¼ of the coconut, then add the final layer and spoon all but 3 tablespoons of the juice over it.

7. Frost the top and sides of the cake, turning the plate so that the unfrosted areas face you as you go, and pat the rest of the coconut evenly over the frosting. Spoon the remaining juice over the top of the cake a spoonful at a time, letting it soak in before adding more. Restrain yourself and let the cake sit for at least 24 hours before cutting it. Once it is cut, keep it well covered and, if the cake should last more than 3 days (I wouldn’t know; mine never has), keep it refrigerated.

1. Position a rack in the center of the oven and preheat it to 350° F. If the rack isn’t wide enough to hold all the pans at once without touching, arrange 2 racks in the center. Butter and flour the cake pans as directed on page 000. Separate the eggs, placing the whites in a glass or metal bowl. In a large mixing bowl cream the butter until fluffy and gradually beat in the sugar until the mixture is light, lemon-colored, and fluffy. Beat in the yolks of the eggs, one at a time.

2. Sift or whisk together the flour, baking powder, and salt. Alternately beat in the flour and milk in about 4 additions, beating only until it is smooth. Stir in the vanilla.

3. In their separate bowl, beat the egg whites with a clean whisk or electric mixer until they form stiff, but not dry, peaks. Temper the whites by folding a little batter into them, then add them to the batter and gently fold them in until no large lumps of egg white remain.

4. Divide the batter equally between the pans, then tap them sharply on the counter several times to make any large air bubbles rise to the top of the batter. Bake in the center of the oven, with the pans not touching and, if they are on more than one rack, staggered so that one pan is not directly over another, for 25 to 30 minutes, until the tops are lightly colored and a straw or tester inserted in the center comes out clean. Cool the cakes on a wire rack before taking them out of the pan and icing them in one of the following recipes or with your favorite frosting.

So called because it cooks, you guessed it, for seven minutes, it’s other name, like “boiled” custard, is misleading: it should never actually boil or it will be ruined. A hand-held mixer makes the job of beating this frosting much easier, but a wire whisk or hand-cranked eggbeater will do. Only make this icing when you are ready to frost the cake, or it will crust over.

1. Prepare the bottom pan of a large double boiler with water and bring it to a simmer over medium heat. Off the heat, combine the egg whites, sugar, and water in the top pan of a double boiler and beat until the sugar is dissolved and the mixture is smooth.

2. Put the top pan over the simmering water, making sure that the water doesn’t touch the upper pan at any point. Beat for 7 minutes, or until the frosting holds soft peaks.

3. Remove it immediately from the heat and continue beating until the frosting is thick enough to spread, and ice the cake at once.