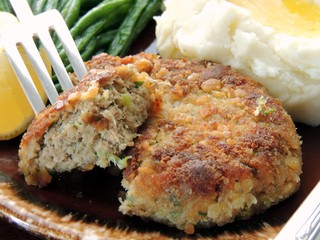 MaMa's Salmon Balls or Croquettes if you want to be dainty, served on one of her brown flameware plates with her flatware.

Nostalgia does odd things to us, at times when we’re least expecting it. Last week, while ambling down an aisle at the market, minding my own business and looking for something completely different, nostalgia, in the form of a large can of wild-caught “Traditional Style” salmon, jumped right off the shelf and accosted me.

“Traditional” means it was packed whole, skin, bones, and all. And standing there looking at that neat stack of pink-labeled cans, what my mind’s eye saw was a gray-striped pink cylinder of fish standing tall in a chipped and grazed creamware bowl of my grandmother’s. Suddenly, she was right there beside me, murmuring excitedly, “They’re on sale! Let’s get some!”

MaMa loved salmon better than just about anything, and nothing made her more excited than sliding that tall pink cylinder of fish out of its can into that well-used bowl. She wasn’t known for being careful in the kitchen, but salmon was a big deal. She’d hunch over it and diligently pick out every scrap of skin and bone.

Well, come to think of it, maybe not every scrap. But still. It was more care than she gave most things, including cakes.

She could and sometimes did eat it just as it was, piled on saltines, but more often made it up into croquettes that in those days were known as “salmon balls.” Nowadays called “salmon burgers” (since people with dirty minds have tainted the old name), they’re sometimes made by the hoity-toity with fresh fish. But MaMa never saw a fresh salmon until her cooking days were long over, and I can guarantee she would never have wasted it on a croquette.

She didn’t follow a recipe: Beyond flaked fish, cracker crumbs, and egg, they were rarely exactly the same because she used whatever was on hand. She liked green onions and celery when she had them, but used chopped yellow onion alone when she didn’t. The other seasonings were simple so as not to overpower the fish: salt and pepper, a dash of cayenne or maybe hot sauce, perhaps a few dashes of Worcestershire.

It’s funny how much one’s memory can pack into just a few seconds. And as all that flashed through my head and warmed me, I knew there was nothing to be done but buy one of those cans and bring it home. Not having her creamware bowl, I slid the fish out onto a plastic cutting board to pick out the skin and bones, flaked it into a bowl, and made up her salmon balls the way she did, not following a recipe, with what I found in my vegetable bin and pantry.

And, do you know—she was right there beside the whole time.

For reasons best known only to them, the industry no longer produces the 1-pound cans of salmon that my grandmother knew. They’re a little over an ounce shy of a pound. But never mind. The thing you need to know is that whole-packed fish will have more flavor than that which is skinned and boned. Yes, it’s more work, but not all that much, and it’s worth it.

1. Pick through the salmon to remove the bones and skin and flake it into a mixing bowl. Crumble in enough crackers to suit you (MaMa’s proportion was about 1/3 crackers to 2/3 fish) and then add the celery, scallions, parsley, garlic, and dry mustard. Season to taste with salt, pepper, cayenne, and several dashes of Worcestershire and gently toss to mix. Fold in the mayonnaise, taste and adjust the seasonings, then mix in the egg. Form into 4 equal balls, then flatten them into 1-inch-thick cakes.

2. Spread the cracker crumbs in a shallow bowl or plate and, one at a time, coat the cakes with crumbs. Transfer them to a clean, dry plate as you go. Refrigerate for at least half an hour before cooking them.

3. Put a well-seasoned iron or nonstick skillet pan over medium heat and film the bottom with oil. When it’s hot but not quite smoking, slip the salmon cakes into the pan and fry until the bottoms are golden brown, about 3-4 minutes. Carefully turn and continue cooking until the second side is evenly browned, about 3 minutes longer. Blot briefly on absorbent paper, then transfer to warm serving plates and serve hot with lemon.

Inspiration for the can of salmon in my pantry!

I do what I can! Hope all's well in your world, Francine!

I didn't know anyone could - - or would - - pick out the bones and skin from canned salmon till I was grown and away from home for a long time. Mother always used the salmon as is, and that often included some of the liquid from the can.
This looks like a good, tasty, basic recipe without expensive ingredients, something homey and comfortable. The recipe I use now is like your grandmother's in that it seldom the same twice. This one really does look good!

Thank you so much! I try!