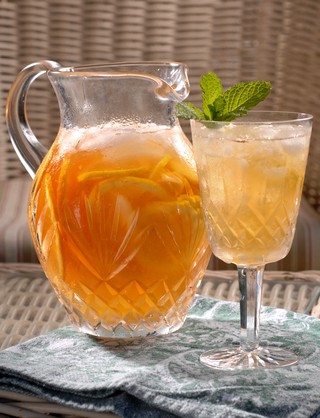 Today, in part because of the horrendous weather that’s wreaking havoc elsewhere in the South, we’re having an unusual and welcome break from the long, unrelenting swelter that’s August in the lowcountry. With almost daily showers and high temperatures hovering at three digits, the outdoors has been a giant steam bath since July. Every year we complain that it seems worse than the last, but if we’re honest, we’ll admit it’s pretty normal for summer down here. Still, it often leads us to ponder how our ancestors got through it without air-conditioning.

The answers to that puzzle are: mountain cabins, beach cottages, and sherry cobbler. Families that could fled to cabins in the hills or to cottages at Tybee Beach. But regardless of where they did—or didn’t—go, they soothed their overheated brows with a tall, cool cobbler.

Before you say anything, I’m well aware that “cobbler” is an old name for a shoemaker and, for most Southerners today, a deep-dish pie made with fruit or sliced sweet potatoes. But the cobbler I mean isn’t a tall, cool shoemaker or a glassful of pie. While the pie does go back at least to the early nineteenth century, it didn’t assume the shoemaker’s moniker until much later. Back then, a cobbler in culinary terms was a drink: lemonade spiked with sherry or sometimes whiskey. It’s actually survived into our day, though some Southerners are still confused by its name.

How a beverage and, later, a pie came to have the same name as a shoemaker is lost in folklore. The usual explanation is that the old English verb “to cobble” means “to patch up.” The pie, by all accounts a homey, patched-together affair, is thought to have come by it for just that reason, and “patching-up” is presumably what the beverage will do for heat-withered souls who drink it.

Personally, those explanations always seemed to me a little too neat to really be true, but never mind. What matters is that sherry cobbler was and is a light, refreshing, and wonderfully cooling way to get through these last wilting days of August and early September.

This recipe is from my first cookbook, Classical Southern Cooking, published in 1995, and was adapted from antebellum sources. It continued to be popular through to the end of nineteenth century and has periodically made a comeback in the twentieth and twenty-first centuries as new generations rediscover it.

Makes about 1½ gallons, serving about 30

1. Roll 10 to 12 lemons well, then halve and juice them through a strainer into a large punch bowl until you have 1½ cups of juice. Add the sugar and stir until it’s dissolved. Slice 2 lemons as thinly as possible and add them to the bowl. Cover and let sit for at least 1 hour—2 is better.

2. When ready to serve it, add the water and sherry and stir until well mixed. Taste and adjust the sugar and sherry to suit, and add enough ice to chill it thoroughly. Serve in tall glasses over plenty of ice, garnishing each serving with mint.

Here’s is a century-old Savannah variation that adds orange and pineapple to the mix. It’s adapted from a 1913 cookbook published by Savannah’s First Baptist Church—yes, Baptist. Temperance actually came late to that denomination, and even later to its churches in Savannah, where many Baptist have never bothered to pretend that they don’t recognize one another in the liquor store.

1. Thinly slice 1 orange and 1 lemon and juice the remaining ones. Put the sliced orange in a 2-quart glass pitcher. Sprinkle with sugar and cover with a ½-inch layer of finely crushed ice. Next add the sliced lemon, again sprinkle lightly with sugar, and cover with a second layer of ice. Finally add the pineapple, sprinkle with sugar, and top with a third layer of ice. Pour the orange and lemon juice over it and let stand for 30 minutes.

2. Stir in the water and sherry. Taste and adjust the sugar and sherry to suit, then fill the pitcher with crushed ice. Serve in tall glasses with more ice and straws, garnishing each with mint.

Recipes adapted from Classical Southern Cooking (copyright © 1995 and 2008), and The Savannah Cookbook (copyright © 2008) by Damon Lee Fowler, all rights reserved.