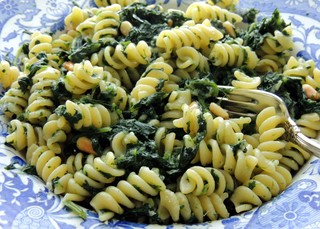 In her later years, M. F. K. Fisher, the prominent mid-twentieth-century American essayist and food writer, once wrote poignantly of missing the ravenous, almost insatiable hunger of youth. Charmingly romantic to read in one’s twenties, it wasn’t so charming to reread years later, when that youthful hunger lingered and fought with a suddenly slowing metabolism of middle age. But there’s nothing charming or romantic about it when old age is staring one square in the face.

The problem is that, while our appetite and capacity may slow down with age, the curious cook’s palate doesn’t slow down with it. It’s still about five years old, bouncing off the walls and ready for anything: “Ooh, I want that!—This is SO good and I want more—And I have to try this—Oh, and that, and that, and . . .” until suddenly it’s pulled up short by an aging system that can no longer handle volume and, all too often, variety. We either learn to listen to and respect the alterations in that system, or deal with constant rebellion, not to mention a waistline that will no longer listen to reason.

What Mrs. Fisher didn’t add at the time is that our appetite not only slows down, it often reverts. Although my own culinary curiosity remains as strong as ever, I’m finding that my cravings for the flavors of my childhood—my grandmother’s pimiento cheese, country-style cubed steak with onion gravy, poke sallet (or any other green) with salt pork and green onions, and her summer vegetable soup, thick with okra, tomatoes, and butterbeans—are stronger.

The curious thing about this regression, if you want to call it that, is that a craving for the cooking of Italy has grown with it, and not just the cooking of Parma, which is so strikingly like the food from my Southern youth, but also of Genoa, where as a young adult I did part of my graduate studies. Indeed, it’s almost as if these two attachments to the food of my early childhood and of my second childhood in Liguria have become inextricably mingled. This odd union has begun manifesting itself in the oddest ways.

That stand of poke sallet in my back garden, which has gone into several batches of greens sautéed with salt pork and onions as my grandmother made them, has also tapped into a dim memory of Genovese ways with greens. The result was pasta sauced with greens, olive oil, and pine nuts, which, while neither quite Genoese nor Southern, nonetheless satisfied something deep in my soul that age can neither touch nor diminish.

1. Wash the greens in several changes of water and drain them. Put the pine nuts in a 10-inch skillet over medium heat. Cook, tossing occasionally, until they lightly toasted. Take them up to a small plate and spread them.

2. Half fill the skillet with water, cover, and bring it to a boil. Add a spoonful of salt and drop in the greens, pressing them below the surface. Cook until they’re just wilted. Drain and spread them to cool. If you’re using poke sallet, repeat this process once more. When the greens have cooled, gently squeeze out the excess moisture and roughly chop them.

3. Bring 4 quarts of water to a rolling boil. Stir in a handful of salt and the pasta and cook, stirring occasionally, until al dente (firm to the bite but no longer hard and pasty in the center). Meanwhile, wipe out the skillet and put in the olive oil and scallions, holding back about a tablespoon of the green parts. Sauté over medium heat until the white parts of the scallions are translucent, about 1-2 minutes. Add the garlic and toss until fragrant, about 15-30 seconds, then add the greens. Toss until they’re hot through and tender, about 2 minutes. Season them with salt and pepper and add the oregano and reserved scallion greens. Toss well and turn off the heat.

4. When the pasta is done, drain it and add it to the skillet. Off heat, toss well and then add the butter, toasted pine nuts, and 2 tablespoons of the cheese. Toss again and serve, passing the remaining cheese separately.

Notes on the greens: you can use just about any kind of edible wild green. If they have woody stems like dandelion, strip each leaf from the stem and discard the stem. If using poke sallet, know that it’s only edible for a brief period of late spring when the leaves are very young. It can’t be eaten raw and should be blanched twice before using it. If you have to be content with cultivated greens, beet tops or chard greens make a fine substitute.