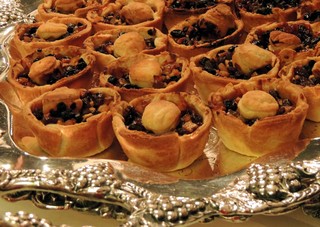 Individual Mince-pies, here cooked with a puff pastry topper instead of the usual full top crust.

A while back I was asked to—or perhaps more accurately, was cajoled into—planning and cooking a supper for a Dickensian Christmas ball earlier this month. The menu was to be drawn from Charles Dickens’ classic A Christmas Carol, published in 1843. As we started to plan, the first heady morsel from the text to tease our imaginations, and the first name to pass our lips was “mince-pies.” Mentioned at least twice, these pastries were, back then, the very essence of Christmas and to this day remain an iconic symbol of holiday feasting.

There would, therefore, be mince-pies on the dessert board.

The hitch was that I didn’t grow up with mincemeat at Christmas and had never so much as tasted it, let alone made it. The only thing I did know was that even though there was usually some chopped meat and beef suet in the filling, “meat” in this instance hearkens back to “sweetmeat,” an old name for dried, glacéed, and candied fruits, as well as nuts, bonbons, and other candies.

The only thing to do was to turn to Miss Eliza Acton, a contemporary of Dickens and arguably the most important English food writer of the nineteenth century. Her iconic cookbook, Modern Cookery for Private Families, was published just two years after A Christmas Carol and was one of the most influential and copied books of the era (great hunks of it were boldly plagiarized in Beeton’s Book of Household Management, published in 1861).

Though in Miss Acton’s day mincemeat always contained suet (grainy beef fat, the finest being that around the kidneys) and usually a bit of chopped cooked beef, only the first, identified as the “author’s receipt,” included one part boiled and minced ox tongue (or roast sirloin) and two parts minced “beef kidney-suet.” The second, named “Superlative Mincemeat” included the suet but no meat (though she did say that, in her opinion, adding it would improve the mixture).

Both contained tart apples, boiled lemons, currants, raisins, and candied citron and citrus peel, and included brandy, sherry, sugar, and spices, not only for flavor but also as a preservative. For our party, I blended the two recipes, leaving out the meat and substituting small-diced cold butter for the suet, since good quality suet is scarce in our area. The only other change was the addition of a little flour to bind the filling when it was enclosed in the pastry.

Mince pies were traditionally baked in a double crust (Miss Acton called for puff pastry) but we opted for open tartlets, giving each a topknot of puff pastry. And just before serving, we finished them with a dollop of whipped cream.

Perhaps Mr. Dickens and Miss Acton would’ve taken a dim view of our meatless mincemeat, as, no doubt, will some of you who were weaned on the more traditional version, but it appealed to everyone and I must say was awfully tasty.

Make this at least two days before you plan to use it so that it will have time to ripen properly.
Makes about 32 cups

1. Put the lemon juice and both kinds of zest in a large mixing bowl. Peel, core, and chop the apples, adding them to the bowl and mixing them with the juice as they’re done.

2. Mix in the sugar, then add the raisins, currants, and candied fruit/zest. Season it well with nutmeg, mace, ginger, and add a teaspoon of salt. Finally stir in the brandy and sherry. Cover tightly and let it stand at least two days before using. (It’ll keep for at least two weeks.)

1. Position two racks about 4 inches apart in the middle of the oven and preheat it to 400° F. Lightly butter 2 standard 12-well muffin pans. Regardless of which pastry you’re using, roll it out about 1/8-inch-thick. Cut it into 24 4-inch rounds, either with a 4-inch diameter cookie cutter or using an inverted 4-inch diameter dish such as an individual glass baking dish as a guide. (If you’re using the puff pastry, use the scrap pieces to cut the top-knot rounds.)

2. Line each muffin-well with pastry, gently pressing it into the inside edges without stretching it. Refrigerate them for 20 minutes to allow the pastry to relax.

3. Stir the diced butter into the mincemeat until it’s evenly distributed. Sprinkle the flour over it and fold it in. using a 2-ounce (4 tablespoon) portion scoop or ¼-cup dry measuring cup, scoop a scant ¼ cup or less of the mincemeat mixture into each pastry, filling it to within 1/8-inch of the top edge and making sure to include some of the liquid. If liked, top each with the 1-inch rounds of puff pastry. Bake until the pastry is lightly browned and the filling is bubbly, about 20 minutes. If they seem to be browning too quickly, reduce the heat to 375 degrees.

4. Cool the tartlets in the pans on wire cooling racks, then carefully remove them to a platter or tray. Just before serving, if you want to top them whipped cream, whip the cream until it forms soft peaks and dollop a spoonful onto each tart.