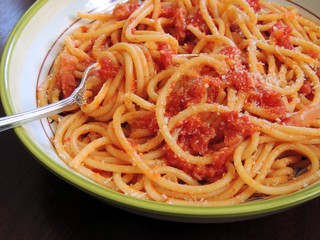 Bucatini all'Amatriciana, hollow spaghetti with spicy tomato sauce in the style of Amatrice

By now, most everyone has heard that in the early hours of Wednesday, August 24, central Italy was hit by a major earthquake of 6.2 magnitude, followed by a series of aftershocks that were still rattling the region as late as Friday. Among the remote little towns and villages that were hardest hit was Amatrice, the birthplace of one of Italy’s most celebrated dishes of pasta: fat, hollow spaghetti (known as bucatini) tossed in spicy tomato sauce with chili peppers and salt-cured pork.

Much of the village’s historic center has been either leveled or severely damaged. As relief workers scramble to help survivors and search for victims, there’s been a lot of conversation about what can be done to help. The reports from friends in Italy are that the relief workers have all the material goods they can use, but in these situations, there is never enough money.

As cookbook author and opera lover Fred Plotkin has reminded us, the soul of Italy, its sustenance and comfort, has always been its pasta. And the soul and heart of Amatrice is in its celebrated bucatini all’amatriciana. Plotkin offered up a fine idea for raising relief funds by suggesting that restaurants in our country offer a donation to the Italian Red Cross for every order of a pasta dish for which the decimated towns within the region are celebrated. Some have taken him up on the idea and are also offering fund-raiser dinners featuring foods from the area.

If you’re not in able to participate in any of that, you can make donations directly to the Italian Red Cross. You can also show support for the pasta companies who are helping with the relief efforts by purchasing their products. And you can connect with the soul of the region by sharing the lovely pasta dishes for which they are known.

For half a century, the town of Amatrice has celebrated its most famous pasta dish, bucatini all’amatriciana, with a festival. The festival that would have begun today and extended over the weekend was to have been its fiftieth.

It may not seem like much, but sharing a bowl of this spicy pasta will help keep the spirit both of the festival and the village where it would have occurred alive.

What follows is the late Marcella Hazan’s recipe for bucatini all’amatriciana. There are probably as many recipes for this celebrated dish as there are citizens of Amatrice. Some cooks deglaze the pan with a little white wine before putting in the tomatoes, and many use olive oil instead of the butter and oil blend called for here. But the original fat was actually lard, and I find that Marcella’s blend of butter and oil comes closer to the delicacy of that fat. Some cooks include a couple of minced garlic cloves or use it in place of the onion, and others add a finely chopped carrot. If you opt to add garlic and carrot, use half the onion called for here.

The original salt-cured pork in the sauce was Amatrice’s guanciale, the salt-cured jowl or snout of the hog. Its fat is more delicate than pancetta, which comes from the belly (the same cut as our bacon) and its generally less salty, but if you can’t find guanciale (it’s not available where I live) pancetta can be substituted, though the flavor and texture won’t be quite the same.

Amatrice is also celebrated for its pecorino (sheep’s milk cheese), and the original recipe used only that cheese, but it’s not widely available and pecorino romano is sharper and saltier, so here Marcella has cut back the pecorino and added Parmigiano for balance.

If you want to try the wine, add half a cup of dry white wine at the end of step 1 and let it evaporate a little before adding the tomatoes.

1. Cut the guanciale or pancetta into strips about an inch long. Put the oil, butter, and onion in a heavy-bottomed saucepan over medium heat. Sauté until the onion is pale gold, then add the pancetta. Cook for about a minute, until it loses its raw red color, stirring a couple of times.

3. Meanwhile, bring 4 quarts water to a boil in a 6-8 quart pot. When the sauce is almost done, add a small handful of salt to the water and stir in the bucatini. Cook, stirring occasionally, until al dente, using the package directions as a rough guide and starting to check it about a minute before the suggested time has lapsed. When it’s almost done, if necessary reheat the sauce over medium low heat, and when the pasta is ready, drain and immediately toss it with the sauce. Add the two cheeses, toss, and serve immediately, passing more of either cheese separately.