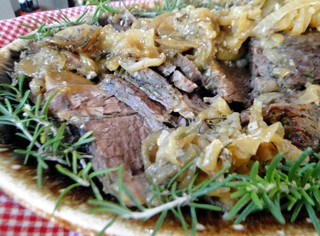 My grandfather's pot roast with onions: the rosemary here is merely a garnish for the platter. I learned the hard way that it didn't hurt the roast, but it didn't add a thing that was worth remembering.

We Americans seem to have become terrified of silence. We’ve deliberately surrounded ourselves with noise: whether it’s our own radios, sound systems, and televisions, or the ones in our stores, waiting rooms, and offices, there’s an unending soundtrack to our lives, numbingly underscored by a monotonous rhythmic thump.

Even when those other noises are missing (and, all too often, even when they’re not), we’re talking. Non-stop. Count on it: in any moment where complete silence is the order—a religious service, a funeral, the quiet contemplation of nature or art, that silence is always, always interrupted by the sharp hiss of a whisper.

Our need to fill the void permeates nearly everything we do, but it’s most troubling manifestation is in our kitchens. One of the late Marcella Hazan’s most famous—and all too frequently ignored—maxims was that what we leave out of the pot is just as important as what we put in. She once sharply took a chef to task for unnecessary culinary embellishment in an essay entitled “And then you add something more . . .”

The chef had published a recipe for the Bolognese classic pork loin braised in milk, an ancient dish that for hundreds of years contained no more than five ingredients—pork, milk, butter, salt, and pepper. Yet the list of ingredients in the unfortunate rendition in question was nearly three times longer, and included troubling amounts of garlic and herbs that were harshly incompatible with milk. It was, as she aptly put it, pure “culinary vandalism.”

Marcella was not a minimalist, nor was she a rigid traditionalist who couldn’t allow for the touch of individuality that each cook inevitably brings to the pot. But she did have a deep respect for good ingredients that were not covered up by a lot of culinary noise.

The worst manifestations of that noise are not, however, happening in Italian cooking, but, I’m sorry to say, in that of my homeland, the loose collection of cuisines that we call “Southern Cooking.” Maybe it’s a sense of inferiority, a notion that our simple, plain-Jane approach to cooking can’t be legitimized unless it’s somehow embellished or “reinvented,” whatever that means. But all across the South, professional chefs and home cooks alike are betraying an alarming inability to know when to leave well-enough alone.

Whenever I publish a recipe for a traditional Southern dish, inevitably one or more readers will ask “have you tried adding . . . ?” Usually, manners will keep my inner teacher and curmudgeon from responding “have you tried not adding it?” But often I do want to say it. Not because I’m wedded to my own way or (at least I hope not) intractable, but because I believe that good ingredients don’t need complication to bring out the best in them. All they need is respect.

The strength of both Southern and Italian cooking is simplicity, a foundation of the best ingredients that can be had, gathered at their peak and treated with care and restraint. The traditional dishes of both cuisines are simple, yes, but not because the cooking is simplistic: it’s because the cooks within the tradition have long appreciated that when a main ingredient is at its peak, it doesn’t need a lot of help to be at its best.

Good pimiento cheese is not made the best by what we add to it—olives, pickles, onions, garlic, palate-numbing doses of chili peppers, or, God help us, honey. It’s made the best by beginning with first-rate cheddar and by then adding only what is necessary to bring out its flavor.

I’m not saying that additions to a traditional dish should never be admissible, nor that changes cannot be welcome. It’s dinner, not a museum exhibit. I’m just saying that before we add and change things, we should think carefully about whether we’re boosting the flavor that’s already there, or merely drowning it out with too much culinary noise.

The best thing I can think of to illustrate my point is my grandfather’s pot roast. Having learned from his mother, Levis Holmes was a natural cook whose instincts always seemed to tell him when to stop. His approach was straightforward and simple, but never simplistic. The ingredients here are few, and the method may look artless, but Granddaddy was a butcher by trade, and knew that everything rested on the quality of the beef and onions. There’s nothing here to stand in the way of, or mask, the wonderful marriage of their flavors.

1. Position a rack in the center of the oven and preheat the oven to 300° F. Trim enough fat from the meat to make about a tablespoon of rendered fat. Put the fat in a heavy-bottomed skillet, preferably well-seasoned cast iron, and let it render over medium heat. Take out the solids that remain, add the roast, and brown it well on all sides. Season it well with salt and pepper, then take it up and remove the skillet from the heat. Set the pan aside.

2. While the meat is browning, fit a covered roaster or Dutch oven with a trivet or rack and pour in half a cup of water. Cover the trivet with a layer of onion, then lay the browned beef on top of them. Cover the meat with the remaining onions and sprinkle them with a little more salt and pepper. Cover tightly and bake until the beef is fork tender, about 3-to-3½-hours.

3. Remove the meat to a platter, cover it loosely with foil, and let it rest at least 15 minutes. Meanwhile, skim off the excess fat from the pan juices, reserving 2 tablespoons. Warm the reserved fat in the browning skillet over medium heat. Stir in the flour, and cook, stirring, until it’s bubbly, smooth, and lightly browned. Gradually stir in the pan juices, bring to a simmer, and simmer, stirring frequently, until thickened and the flour has lost its raw, pasty taste, about 4 minutes. Adjust the seasoning and pour it into a warm sauceboat.

4. Take the onions off the roast, slice the meat, and arrange it on a platter. Drizzle it with some of the gravy and scatter the onions over it or around the edges of the platter. Serve at once, passing the remaining gravy separately.