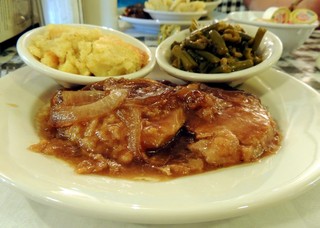 The Dixie’s Smothered Pork Chops, with sides of spoonbread and slow-cooked string beans.

When we’re visiting family in Petersburg, Virginia, we always pay at least one visit to the Dixie Restaurant on Sycamore Street. Known to locals simply as The Dixie, it’s been around since the 1940s. Though over the course of those years this family-owned institution has known several incarnations, today it has returned to its roots as an old-fashioned neighborhood diner.

Places like The Dixie were once the epicenter of small-town Southern life, serving up in equal portions hearty, unapologetically homey food, frosty sweet tea, and local gossip. They were the Southern version of the ancient Greek agora where everyone met. Though today, they’re a vanishing breed, where they still exist, these diners offer an invaluable touchstone to our past.

There’s always a printed menu, but the soul of these joints is a dusty-black chalk- or shiny-white marker-board, covered with a regularly changing litany of daily specials.

While the printed menu is filled with the usual diner lunch staples—BLTs, chilidogs, grilled pimiento cheese, and tuna-salad plates, the special board is where the real nostalgia happens. That’s where you’ll find the kind of fare that once graced home tables all over the South in the days when dinner was served at midday.

There are inevitably half a dozen main dish specials and at least that many side dishes (which, by the way, are always referred to as “vegetables” even when they’re macaroni pie and rice and gravy). Customers choose one of the daily meat specials and round out the plate with up to three vegetables, which was how these places came to be called “meat-and-three cafés.”

Though made-to-order things like fried chicken and breaded veal cutlets can often be among the specials, most of the offerings have always been things that can be made ahead and held on a steam table without damage: pot roast, stew, meat loaf, and “smothered” things—tougher cuts of beef, veal, pork, or chicken literally smothered with gravy and slow-simmered until fork tender.

Served forth with house-made yeast rolls or cornbread muffins and bottomless glasses of sweet tea, it may not have been haute cuisine, but it sure was good.

A popular special at The Dixie is smothered pork chops. This homey, unsophisticated dish is sadly underappreciated by the modern foodie crowd. But when I had it, accompanied as it was by their signature spoonbread and salty, slow-cooked green beans, it brought back a flood of childhood memories and satisfied in a way that the thick, under-done grilled chops commonly found in today’s so-called “nouvelle” Southern cafés could never have done.

This is as close as I’ve been able to get to that comforting flavor. It’s not quite there, but it’s pretty close—and not bad, if I say it myself.

1. Trim the chops of excess fat and season generously with salt, pepper, and garlic powder.

2. Heat the fat and oil in a lidded cast iron or other heavy-bottomed skillet over a medium-high heat. Roll the chops lightly in flour, shake off the excess, and add them to the pan. Brown well on both sides (about 2-3 minutes per side) and remove them to a warm plate. Add the onion to the pan and sauté, tossing often and scraping the pan to loosen any fond that may have accumulated on the bottom, until the onion is golden brown, about 5 minutes.

4. Return the chops and any juices that have collected in the dish to the pan, add a splash or so of Worcestershire, to taste, then cover and lower the heat to a slow simmer. Simmer, occasionally stirring and turning the chops, until they’re fork tender and the gravy is thick enough to suit you, about 1 hour. If the gravy gets a little too thick before the chops are tender, thin it with a little water, not more broth.

5. Remove the chops to a warm platter. Taste the gravy and adjust the seasonings, pour it over the chops, and serve.