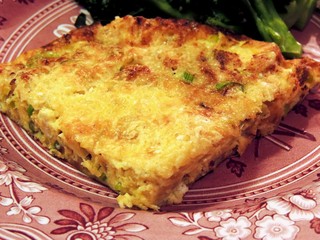 Sundays are busy days in my house. We’re up and out to church early: Tim is the organist-choirmaster and I help with the food for coffee the hour after services. If I’m on the schedule at the store, I go there straight from church, which makes for a very long day. By evening, we’re both ready to be off our feet, preferably with a glass of wine in hand.

Sunday supper, then (especially on those work days), is usually a simple meal.

Often, eggs are involved, and one of our favorite ways to have them is in a frittata. The flavors and textures of the classic Italian open-faced omelet resonate with me, and not because I am a hopeless Italophile: they actually stir up flavor memories of my own Southern childhood.

Whether because he knew about them or just lucked into the method is lost to memory, but it was exactly how my father, on the rare occasions when he did cook, made omelets. And perhaps the memory of his omelets is why the flavors of my own frittate usually have a bit of a drawl about them.

Anyway, a quick survey of the refrigerator turned up some lovely applewood smoked bacon, a couple of leeks left over from my last newspaper column and, of course, a good hunk of Parmigiano-Reggiano cheese.

Even though there were only two of us, I made a full six-egg frittata: this kind of omelet is almost as good leftover as it is warm from the pan, and the thinking was that we’d get lunch from it. No such luck: it was so good we ate the whole thing.

Bacon and Leek Frittata
Serves 4 as a main dish

2. Put the bacon in a heavy-bottomed 10-inch nonstick or well-seasoned pan with a broiler-safe handle. Turn on the heat to medium and sauté until it is golden brown and its fat is rendered. Lift it out with a slotted spoon and drain it on paper towels. Spoon off all but a tablespoon of the fat. Add the onion to pan, cover, and cook over medium low heat until the onion is wilted, about 10 minutes. Uncover, raise heat to medium, and cook, stirring often, until the onion is golden about 10 minutes. Add the leek and sauté until wilted and translucent. Transfer them to a bowl. Wipe out the pan.

3. While the onion and leek are cooking, position a rack about 8 inches below the heat source and preheat the broiler for at least 15 minutes. Break the eggs into a mixing bowl and lightly beat to mix them, season lightly with salt, generously with pepper and nutmeg. Beat until smooth.

4. Put the butter into and melt it over medium heat. When the butter begins foaming, stir the bacon, onion, leek and ½ cup of the cheese into the eggs. Swirl the pan to evenly coat it with butter, then pour the eggs into pan, stirring in the bowl as you pour to keep the solid ingredients evenly mixed. Reduce heat to low and cook until bottom is set and only top is wet and runny.

5. Sprinkle the remaining cheese over the frittata and put pan under broiler and broil until top is set, about 1 minute.