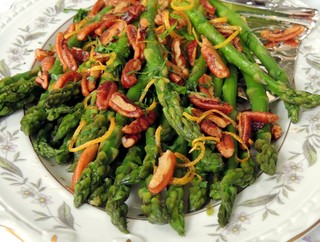 The text you type here will appear directly below the image

Flowers are lovely and all very well, but they satisfy only two of our senses. Asparagus gets all five—even sound, if it’s not overcooked. And when it’s freshly cut (that is, only minutes from the bed), it needs absolutely nothing, not even butter. Strong flavors like ham, leeks, garlic, and even lemon can be paired with it only with care and restraint.

But even though we’re now coming into its local growing season, unless you’re lucky enough to have your own asparagus bed, or access to those of a local farmer, you won’t be getting “fresh” asparagus. The stuff in our grocers’ coolers will have been harvested as much as two or three weeks ago, and from fields that are nowhere near where we live.

Happily, there’s a lovely way to get the most from this vegetable even if it’s not as fresh as you’d like: this rich pecan and lemon brown butter. Though distinctly flavored, this sauce reinforces the delicate yet full flavor of truly just-cut asparagus and gives back some of the bright, just-cut freshness to that which has been languishing in a produce cooler for more than a few days.

Before we get into the recipe, here’s how to get the most from market asparagus. Look for tight, plump heads and stems that are firm and green without a trace of yellow with withering. The cut end, though it will be scarred over, should not look dry, split, or white with mold, but plump, clear, and full of moisture.

The thickness of the stem is no indication of youth, but of variety, so the narrow stuff that’s thin as a pencil is no younger than those with fat stems, and I prefer fat stemmed varieties. The thin ones can be tough halfway up the stem, which means you’ll often lose half the vegetable in the trimming, since they’re too thin to peel, but fat asparagus can be made edible end-to-end.

As soon as you get it home, trim off about an inch of the stems and stand it in a vase or bowl of cold water. Let it drink for at least half an hour. If you are not able to cook the asparagus the same day, cover it with a damp paper towel and refrigerate it, but use it as soon as you can.

When you’re ready to cook it, don’t waste any of it by just breaking off the tough part of the stem, but peel it. Half fill a large bowl or basin with cold water. Lay an asparagus on a cutting board with the top hanging over the edge. Using a vegetable peeler, peel away only the tough lower part of the skin, rotating the stalk as you go. Drop it into the basin of water and repeat until all of it is peeled. Leave it in the water until you are ready to cook, but for no more than 2 hours.

1. Put 1 inch of water in a large, deep sauté pan or lidded skillet, cover, and bring it to a boil over high heat. Stir in a large pinch of salt and add the asparagus, putting the stem end on the side closest to you then letting it fall away from you into the pan. Cover until the water returns to a boil, then uncover and cook briskly until the asparagus is firm to the bite but still bright green, 2–4 minutes, depending on the asparagus. Immediately drain, using the lid to hold the asparagus in the pan, and turn it out onto a warm platter.

2. Wipe out the pan, add the butter, and return it to medium-high heat. When the butter is melted and bubbly, add the pecans and sauté, tossing often, until the butter and pecans are a uniform golden-brown. Add the lemon zest and the juice from one of the halves. Cook for half a minute longer and remove the pan from the heat. Refresh the butter with another squeeze of lemon juice, then pour the sauce evenly over the asparagus and serve at once.