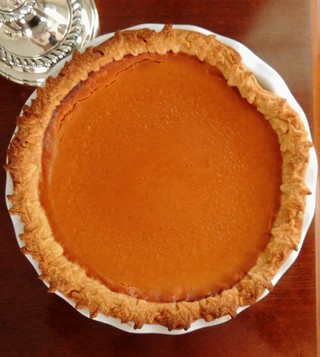 Now that we’ve established that I take an ecumenical approach to the traditional sweet potato and pumpkin custard pies on Thanksgiving’s dessert board, and have shared my grandmother’s recipe for the former, here’s how she made the latter.

It’s just a standard pumpkin custard without frills or “reinvention,” varying from most other American recipes only in detail. Face it: If you are like most of us, pumpkin pie is something you only make at Thanksgiving—no more than once a year. That means you’ll probably need a recipe to be reminded of how it’s done, but it also means there’s no absolutely no reason for you to reinvent it every blessed time you do it.

Last year, there was a rage for something called brûlée pumpkin pie. It was nothing more than the usual custard tarted-up with a hardened crème brûlée sugar topping. You will notice that no one is talking about it this year, and not without reason: for one thing, it was a gimmick to get our attention—and they’ve long since moved on to other attention-getting gimmicks for this year. For another, it was more work and trouble than it was worth, and added nothing to the pie that was worth remembering in the long run.

In short: Just make the thing the way God meant it to be and serve it up with plenty of whipped cream and you’ll go down in history – at least within your family, and that’s all that ought to matter to you.

As for making the filling from scratch: You can knock yourself out roasting a whole pie pumpkin for the puree if you want to, but I defy you to tell the difference by the time it’s baked in the pie.

1. After partially-baking piecrust and taking it from the oven, raise the oven temperature to 425° F., and, while the pastry is cooling, stir together the eggs and pumpkin in a large mixing bowl until it’s smooth. Stir in the sugar, spices, and salt, and then gradually mix in 1½ cups of cream or ½ cup of cream and 1 cup of evaporated milk (that’s how my grandmother did it). Pour the filling into prepared pastry. Cover the crust edges with strips of aluminum foil or a pie shield.

2. Bake 15 minutes at 425 degrees. Reduce the temperature to 350 and bake 40 to 50 minutes or until a knife inserted near the center comes out clean. Let the pie completely cool on a wire rack before serving. Some make it ahead and chill it.

3. Serve the pie with a dollop of Bourbon Whipped Cream on top or to one side.