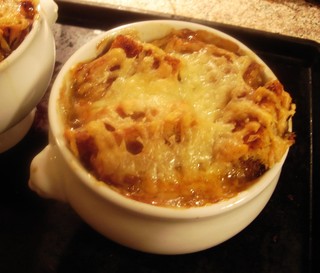 One of the most enduringly popular dishes of fall and winter’s table is Gratinéed French Onion Soup. It’s one dish that we call “French” that actually is; “soupe à l’oignon gratinée” is a standard found in bistros and home kitchens throughout France.

This time of year it begins to turn up on menus throughout our country, too, from New England to South Florida without regard to outside temperatures. Unfortunately, what comes to the table is more often than not as indifferent as it is popular.

That’s too bad, for good onion soup is really quite simple to make, requiring just four main ingredients and a few practically artless techniques. But simple doesn’t mean you can stop paying attention; it means there’s very little margin for error if you do.

The first critical component is caramelized onions, and plenty of them. When onions simmer slowly until they are almost literally melting and caramelize to a rich, deep brown, they lose their sharp edge and become intensely sweet and delicate. They also lose most of their volume, so don’t be put off by the amount of raw onions required.

Proper caramelizing is not at all difficult, but it takes time, and you must be present so that the onions don’t scorch and develop a sharp, acrid taste that no amount of wine and sugar can cover up.

The next critical component is the broth. While canned broth will make perfectly adequate onion soup, the only way to make one worth remembering is to use homemade broth that has been allowed to simmer down and concentrate. In France, the broth is often that which is leftover from Pot au Feu, the French equivalent of a boiled beef dinner.

Not all traditional recipes call for wine as part of the liquid, but most do, and a few even call for the soup to be finished with cognac. I find that dry white vermouth, added early and allowed to evaporate, lends the loveliest flavor without a sharp aftertaste.

Now, many a cook has gotten this far and then spoiled a perfectly good soup with an indifferent gratinée, usually because they’ve chosen the wrong bread and cheese and failed to properly prepare them for the bowl.

The bread can’t be just any bread: you want a firm, fine texture—ideally a European style loaf. Even when properly toasted, spongy supermarket white or “French” bread just turns to mush when baked in the soup. The bread must be carefully toasted with a light coating of butter or olive oil, or it will absorb too much liquid and become soggy and mushy.

Onion soup can be served without the gratin, with the toasted bread simply floating in the top, but that crowning blanket of melted, golden-brown cheese is of course what makes it so special. A quality Gruyère-style cheese is traditional, of which the French version called Comté is the most ideal.

However, almost any good quality semi-hard cheese from Swiss Gruyère and Emmentaler to a well-aged extra sharp white cheddar will work. Some blend in a little Parmigiano-Reggiano. What you don’t want to do is just lay a slab of mild semi-soft cheese like mozzarella or provolone, or an indifferent domestic “Swiss” or cheddar, and add insult to injury with a dry, pre-grated domestic Parmesan.

Once you’ve got the right bread and cheese, and have properly prepared them, the secret to a really fine gratinée finish is to bake rather than broil the soup, as baking allows the cheese to melt more gently and brown without burning or turning bitter.

All that may seem like a lot for a simple bowl of soup, but when you cut through that velvety, golden top, catch the first whiff of that seductive aroma, and dip up a spoonful of rich, dark nectar, I promise you will feel that it has been well worth it.

1. Put the onions and butter in a large, heavy-bottomed Dutch oven: it doesn’t have to be enameled iron, but that will give you the best results. Cover and turn on the heat to medium low. When the onions begin to wilt, reduce the heat to low and cook slowly, tightly covered, until the onions have completely wilted and thrown off most of their liquid, about 30-to-45 minutes.

3. Add the vermouth, stirring and scraping the bottom of the pot to loosen the fond (browned cooking residue), bring it to a boil, and cook, stirring constantly, until it’s evaporated—this won’t take long. Add the broth and season with salt and pepper to taste. You may also add a small bay leaf if you like. Bring it to a boil, reduce the heat to a slow simmer, and simmer gently, uncovered, for half an hour. Turn off the heat, taste, and adjust the seasonings. The soup can be made to this point up to four days ahead.

4. Spread both sides of the bread lightly with butter and toast them in a heavy-bottomed skillet over medium heat, turning often. Let cool and cut into large croutons.

5. When ready to finish soup, preheat oven to 350° F. Bring back to a simmer over medium heat. Put 6 onion soup crocks (I use French white porcelain lion’s head bowls) on a heavy, rimmed baking sheet. Divide the soup among the crocks and top with croutons. Cover generously with the grated cheese and bake until the soup is bubbling, the bread is puffed, and the cheese topping is golden brown. Serve hot.

Rich Beef Broth
Really classic French onion soup is made with the broth leftover from Pot au Feu (boiled beef), which is especially rich and concentrated. While canned broth will make a good soup, but for one really worth having, if you aren’t doing the French ménager thing with Pot au Feu, go the extra mile and make your own broth with meaty oxtails and shank bones.
Makes about 5 quarts

1. Preheat the oven to 400° F. Spread the shanks and oxtails on a rimmed baking sheet, drizzle with oil, and roast until well browned, turning occasionally, about 45 minutes. Put them in a heavy-bottomed 8-12 quart stock pot with 6 quarts cold water. Put the pot over very low heat and cook until scum begins rising to the top, about 45 minutes. As soon as the scum begins to form, carefully skim it off. Do not stir.

2. Meanwhile, stick the whole onion with the cloves. Raise the heat under the pot to medium and add the whole and sliced onions, carrot, celery, turnip, parsley, thyme, bay leaves, peppercorns, ginger, and a spoonful of salt. Let it return to almost to a boil, reduce the heat to gentle simmer and simmer, uncovered, at least 3 hours, checking to make sure it never actually boils. Turn off heat and let it cool.

3. Carefully strain the broth into lidded stainless steel, enameled metal, ceramic, or glass containers, discarding the solids. Let it completely cool uncovered, then cover and refrigerate until fat has solidified. Remove and discard fat. The broth will keep up to 5 days refrigerated, or at least 3 months frozen in sealed freezable containers.

This story originally appeared in the Savannah Morning News on 27 January 2010. Recipes copyright © 2010 by Damon Lee Fowler, all rights reserved.