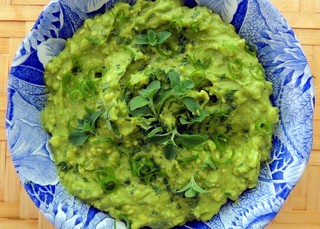 Guacamole with Scallions and Oregano: No, it's not exactly Southern, but it's an example of how our cooking continually evolves

One of the things I love most about Southern cooking is that it’s not a homogenous fabric. It’s a rich, patchwork-like tapestry, woven from many threads and patches that defy the narrow stereotypical boundaries that we all-too-often try to put around it. Even if we could confine it to the most common of those stereotypes—biscuits, barbecue, fried chicken, pimiento cheese, and sweet tea—we’d still be faced with the hundreds of different ways that each one of those things is made all over the South.

Happily, it’s so much more than a handful of stereotypes. Just as the South’s population is an ever-expanding blending of many different ethnic heritages, its cooking is a blending of many different things that have been adopted, adapted, borrowed, and out-right stolen. There are even elements in it that we don’t normally think of as “Southern” per se, except for the oblique role they play in the bigger picture.

A reader once took me to task for sharing a recipe for a guacamole I’d whipped up for lunch, saying that “guacamole” was a name for a specific, codified thing (like Pesto alla Genovese) and I should’ve called the thing I’d made something else, since (a) I wasn’t Latin-American and (b) hadn’t presented a “pure” rendition. The sharp, ill-concealed (and bordering on ill-mannered) inference was “you’re a Southerner: what do you know about guacamole?”

I don’t pretend to be an expert in Latin-American cookery, but it turned out that what I knew was a little more than my reader. The word “guacamole” is not, in fact, a name for a narrowly codified dish. It literally means “avocado sauce,” and Latin-American cooking authority Sandra Gutierrez rightly points out that avocado sauces can be found in many of the different cuisines of Mexico as well as those throughout Latin-America. And, yes, those sauces do vary from country to country and even from place to place within those countries.

As for what a quintessentially Latin-American sauce has to do with Southerners, simply this: it migrated up into the South a long time ago, and has actually been turning up on our tables for at least ninety years and probably a lot longer.

Henrietta Stanley Dull included what amounted to guacamole salad in her iconic 1928 cookbook, Southern Cooking. Called Avocado Salad No. 2 (page 123), it consisted of lettuce and sliced tomatoes topped with mashed avocado that was seasoned with salt, pepper, and lemon juice (in short, guacamole), and rolled into little balls coated with minced green pepper.

Recipes specifically going by the name were turning up in Texas cookbooks and newspapers at least by the 1940s. But dates aren’t nearly as interesting as the fact that the recipes had been fully adapted to regional palates. Mrs. Dull finished her salad with a dollop of mayonnaise in the middle, and one guacamole recipe unabashedly called for mixing mayonnaise right in with the avocado “to make it creamy.” Another, credited to someone named Otis Farnsworth (who, I’m guessing, was probably not of Latin-American heritage) contained softened cream cheese. In short, guacamole in the South had taken on a distinct Southern drawl.

All this came to mind because there were two perfectly ripe avocadoes sitting in a bowl of lemons and limes, a bundle of bright, fresh scallions in the vegetable bin, and a pot of oregano on the back steps that was in dire need of a trim. I don’t presume to say the finished product when those things were all brought together was “Southern” just because a Southern cook had made it, but I am saying that we shouldn’t confine ourselves—or our cooking—in narrow little boxes.

Guacamole with Scallions and Oregano
Makes about 1½-2 cups

1. With a ceramic knife, if you have one, halve the avocadoes, pop out the pits (not with the knife if it’s ceramic), and peel them. Cut them into small chunks and put them in a sturdy ceramic or glass mixing bowl. Squeeze the juice from half a lime over them and mash them, preferably with a silver fork (this will slow down the oxidation that turns them brown). Taste and mix in more lime juice to suit your taste.

2. Peel and roughly chop the garlic, sprinkle it with salt, and rub it to a paste with the flat side and edge of a metal knife blade. Mix it into the avocado along with a small pinch of salt, a few shots of hot sauce, and a teaspoon of oregano. Mix well, taste, and adjust the salt, hot sauce, and lime juice.