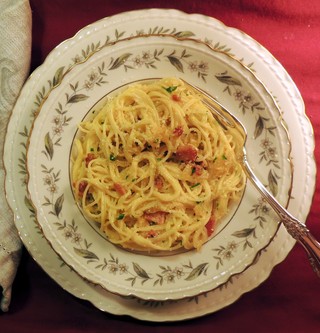 My mother’s wedding china still stands as it did in my youth, in neat stacks in her dining room hutch. Rimmed in gold and sporting a pair of pink-tinged gardenia blossoms at its center, it was old-fashioned, feminine, and just plain “girly.” Yet it was the very essence of elegance and sophistication to my child’s mind.

Last Christmas, I stumbled onto a set of teacups in the pattern on the clearance shelf of an antique store: eight of them, and just two dollars apiece. In a rush of memory, I bought them all, intending to keep a few for nostalgia’s sake, and share the rest with my mother.

Those cups opened a Pandora’s Box: though the last thing I needed was more china—or, at least, the last thing I needed to spend my limited resources acquiring—other pieces soon joined them in my cupboard. And while other things that needed financial attention (including eyeglasses) may have to wait, it has been money well spent. I have Mama’s china without having had to inherit it, and can enjoy memories while still having my mother around. Whenever I use them, they bring her close in my heart and take away a little of the bite of homesickness, which lately has been worse than usual.

Is it any wonder, then, that they come out of the cupboard nearly every time I’m dining alone?

The other comfort that comes out when I’m lonely and homesick is a dish of another kind, something that I never tasted until I was an adult. While allegedly studying architecture in Genoa, Italy, now thirty years ago, I spent more time in the kitchen with our Genovese cook, Ilda, than I did in the studio, to the endless annoyance of my professor. Ilda took me under wing and, despite the fact that she spoke no English and I, only the most rudimentary Italian, became one of the several “mamas” that every Southern man has in his life.

Over the course of those four precious months, she taught me a lot about Italian cooking, including the way she made her richly fragrant spaghetti alla carbonara, the first “real” Italian food I tasted on its native turf. It was like nothing I had ever had before, and yet, in a funny way, it whispered of everything good about my childhood, while at the same time embodying everything that I had fallen for about Italy. It has been a comfort food standard in my kitchen ever since.

Last night, piled into one of the soup plates in my mother’s china pattern, that pasta was a triple comfort, recalling all at once warm memories of Mama, Ilda, and my late friend and mentor Marcella Hazan. It was Marcella’s books that helped me make sense of Ilda’s scribbled and awkwardly translated recipes, and brought her cooking home to my American kitchen.

Serves 4 as a main dish, 6 as a first course

1. To make the soffritto (flavor base), sauté the pancetta in the butter in a small, heavy-bottomed skillet over medium heat until it’s golden and its fat is mostly rendered. Add the onion and sauté until golden, about 5 minutes, then add the garlic and cook until fragrant, about 1 minute. Add the wine, bring it to a boil, and cook until it is thick and almost evaporated. Turn off heat.

2. Bring 4 quarts of water to a boil. Add a small handful salt, stir, and add the spaghetti, stirring to separate the strands, and cook until al dente. Meanwhile, beat the eggs in a warm serving bowl until well-mixed and beat in the parsley and cheese. When the pasta is ready, reheat the soffritto; quickly drain the spaghetti and add it to eggs, tossing to coat well. The heat from the pasta will safely cook the eggs and draw it onto the surface of the pasta, making a sauce.

3. Add the soffritto to the spaghetti, toss to mix, and serve at once.

What a gift to travel across the Atlantic to Italy on the wings of a recipe!

Thank you so much, LaVee! It's the funniest thing about the way a flavor or fragrance can take us back to a place and time in our lives. I can taste that, close my eyes, and almost smell the seabreeze blowing through that house in Genoa. I've never seen Ilda again, but I can see her so clearly in my mind's eye when I make this.