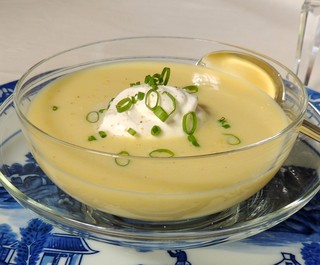 Of all the produce of summer, nothing is as deeply entwined with memories of my childhood, mother, and grandmother, as yellow crookneck squash. Possibly one of the reasons that they stand out is because most of the things that came from my mother’s and grandfather’s gardens were cooked only one or, at best, two ways, but those sunny crooknecks knew no limits.

They were steamed whole, sliced and stewed with bacon or butter and onions, creamed, rolled in cornmeal and fried, baked in a casserole, and, one of my grandmother’s specialties, stuffed with a savory filling of their own pulp mixed with crumbs and green onions and baked until the filling was golden brown.

The one thing we never made was squash soup. Squash was always included in the vegetable soup pot (our version of minestrone made uniquely Southern with the addition of butterbeans, corn, yellow squash, and okra), but never on their own – until my grandmother went out west on one of her beloved bus tours.

MaMa didn’t look the part, but she was a world-class adventuress who loved to travel more than anything. It really didn’t matter where she was going, so long as “going” was the operative word. Whenever her women’s club group announced a trip, she was packed and in the front seat of the bus faster than flies on watermelon.

My grandfather never minded: he loved seeing her happy, and she always came home with wonderful stories and at least one new recipe. Among those new things was a lovely summer squash bisque that she sampled in Texas and promptly sweet-talked the chef out of her recipe.

It immediately became a fixture of our summer table and I’ve never let a summer pass without making it. Even though I was by then in college, to this day when I make it, it takes me back to the lazy summer days of my childhood that were spent in my grandmother’s kitchen, where, no matter how hot it got, she could always make cooking an adventure.

1. Scrub the squash under cold running water, trim the blossom and stem ends, and slice crosswise into ½-inch-thick rounds. Split the leek lengthwise and wash it well under running water to remove the dirt from between the leaves. Remove and reserve the green tops and slice the white part.

2. Put the white part of the leek, onion, and butter in a 4-quart pot over medium heat. Sauté until softened, but not browned, about 5 minutes. Add the squash and toss until hot. Add the broth, bouquet garni, a pinch or so of salt, and liberal grinding of white pepper. Raise the heat to medium high, bring to a boil, and reduce the heat to low. Cover and simmer until the vegetables are tender, about 20 minutes. Turn off the heat.

3. Remove and discard the bouquet garni. Puree the soup with a hand blender, food processor, or blender. Return it to the pot. Thinly slice the inner pale leek greens and add them with the leek greens to the puree. Bring back to a simmer over medium heat and simmer until greens are tender, about 5 minutes. The soup can be made ahead: pour it into a bowl set in a basin of ice water and stir until cold; cover and refrigerate.

4. To serve hot, heat it gently over medium-low heat, stirring occasionally to prevent scorching, then add the half and half and heat it through. Taste and correct the seasonings. Ladle the soup into heated soup plates. Garnish with a drizzle of cream and a sprinkling of the fresh sage or chives.

5. To serve it cold, after chilling add the half and half, then taste and correct the seasonings. Garnish as for the hot soup, or whip the cream until it forms soft peaks, put a dollop on each serving, and sprinkle with the chopped herbs and white pepper.