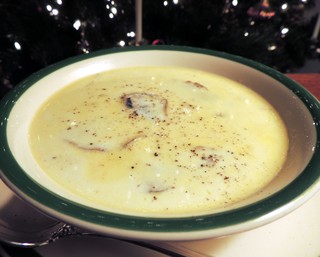 Buttery oyster stew is not particularly photogenic, but it's awfully good to eat. Don't neglect to use plenty of butter: this is celebration food, for goodness sakes!

Nostalgia is a funny thing. Nothing stirs memories of the Christmases of my childhood more lucidly than Doris Day singing “Silver Bells.” Yet the memories conjured have nothing to do with city sidewalks, but of the rolling, red-clay fields and pastures of Grassy Pond, the farm community where we lived until I was ten.

Our Christmas Eves were not spent running from shop to shop for last minute treasures. They were a time for settling in with family—which, in the country, has always had a broader definition than the people who happen share your gene pool. As twilight set in, my parents would herd my brothers and me into our old black Ford Fairlane and we rode through the deepening twilight to the cozy frame house that was home to Mama Macie and Papa Will.

We were technically not related to this lovely old couple: they were the parents of my mother’s best friend, who I knew as Aunt Margaret. But we were family as much as their four daughters, son, sons-and-daughter-in-laws, and dozen or so grandchildren. And all of us were crowded into that little house. It was noisy and a little over-heated, and smelled richly of hot coffee, baking sugar cookies, and—best of all—oysters floating in a rich, creamy stew whose surface was yellow with melted butter and flecked with pepper.

Oysters have always had a special place on the holiday table in the South, and in the upstate, they were to Christmas Eve what turkey was to Thanksgiving. Before refrigeration, they couldn’t be shipped away from the coast until cold weather set in, which was coincidentally just in time for the holidays.

Mama Macie is long gone, but to this day, my own holiday doesn’t seem complete without the stew we savored on those long ago Christmas Eves. It may be simple, it may not be especially elegant, but to me it’s heaven in a bowl, and says Christmas better than eggnog.

The most luxurious oyster stew is equal parts oysters and milk. Here, its 2 parts oysters to 3 parts milk, since they set aside the largest select oysters for Aunt Margaret to fry. You can increase the oysters to 3 pints or even make it a little thinner by adding another pint of milk if you need to stretch it. It multiplies easily; just keep the proportions the same. Serve with plenty of saltines or oyster crackers.

1. Drain the oysters in a sieve set over a bowl, saving the liquor, and pick over them for any lingering bits of shell. Put the reserved strained liquor, milk, and cream in a large, heavy bottomed saucepan. Bring to a simmer, stirring occasionally, and add the butter. Season to taste with salt and pepper and let simmer 5 minutes.

2. Add the oysters and simmer until they’re plump and firm and their gills curl, about 5 minutes, taking care not to overcook them. Taste and adjust the salt and pepper and serve at once, making sure that a goodly portion of oysters and butter makes it into each bowl.

Though many families had only the stew, for Mama Macie it was just part of a whole feast of oysters. She always saved back the largest, fattest specimens, which Aunt Margaret would roll in cracker meal and fry to crisp, golden perfection.

1. Fit a wire cooling rack into a rimmed baking sheet. Drain the oysters and spread them on two layers of paper towels. Have the flour, eggs, and crumbs ready in separate bowls. Season the crumbs lightly with salt and pepper. Put enough lard or oil in a deep Dutch oven at least 1 inch deep but not more than halfway up the sides. Heat until hot but not smoking (375° F.) over medium high heat.

2. Roll half the oysters a few at a time in the flour, shake off the excess, dip in beaten egg and then roll them in the seasoned crumbs until well coated. Slip them into the fat and fry until well-browned, about 2 to 4 minutes, turning if necessary.