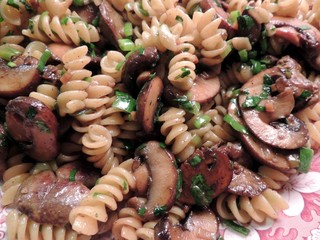 Pasta with Sautéed Chicken Livers, Mushrooms, and Scallions
Two of my favorite luxury indulgences in cooler weather are chicken livers and mushrooms sautéed in copious quantities of butter. And when the two things are brought together in the same pan, why, it’s downright magical.

Unhappily, I’m the only person in my household who thinks of livers and mushrooms as a luxury—much less an indulgence—which means that when the opportunity to have them presents itself, it’s no time to worry about what the weather is like.

Which is why, when a foray to the market for solo dinner makings uncovered a basket of small, exceptionally fresh brown mushrooms, without giving it a second thought, I picked up a packet of plump, ruddy chicken livers, a bundle of bright, slender little scallions, and hurried home.

You might think that such hearty, autumnal fare is the last thing one would want to contemplate on a day when temperatures nudged the underside of ninety, but they turned out to be the perfect antidote to the sweltering heat of midsummer, especially washed down with a crisp glass of ice-cold prosecco. If you don’t want to believe it, then fine: wait for cooler weather to have it.

But don’t wait too long.

1. Bring 4 quarts water to a rolling boil in a 6 quart pot. Trim the livers and cut each one into several pieces. Pat them dry with several layers of paper towel. Wipe the mushrooms with a dry cloth and thickly slice them.

2. Heat 2 tablespoons of the butter and the olive oil in a large skillet or sauté pan over high heat. When the butter stops foaming but isn’t yet coloring, add the livers to the pan and sauté, tossing often, until they are well browned on all sides, about 2-3 minutes. Remove them with a slotted spoon to a warm bowl and season well with salt and pepper.

3. Add another tablespoon of butter to the pan and when it is melted and its bubbling subsides, add the mushrooms and sauté, tossing almost constantly, until they are beginning to brown. Add the garlic and half the parsley, toss until fragrant, and turn off the heat.

4. When the water is boiling, toss in a small handful of salt and stir in the pasta. Cook until al dente (about 2 minutes or even less for fresh pasta, from 7-10 minutes for dried factory pasta). Meanwhile, return the livers to the pan with a slotted spoon, leaving behind any juices that have accumulated in the bowl. When the pasta is almost ready, reheat the mushrooms and livers over medium-high heat, add the scallions, toss, and turn off the heat. Taste and adjust the salt and pepper.

5. When the pasta is ready, drain it (not too thoroughly—it should still have a little of the cooking water in it) and add it to the livers and mushrooms. Add the accumulated juices from the livers and the remaining parsley. Toss rapidly until the pasta is well coated with the pan juices. Taste and adjust the salt and pepper, turn out into a warm serving bowl, and serve immediately.
Be the first to comment