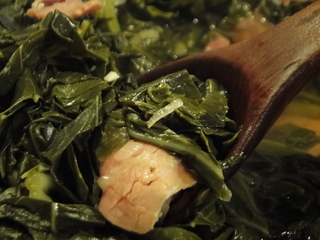 Collard greens, judiciously seasoned with lightly caramelized onion, garlic, and ham should not be limited solely to one day of the year.

One of the most satisfying, calming rituals of the new year in a Southern kitchen is the cleaning, prepping, and cooking of that obligatory mess of collard greens. For me, this ritual is almost as satisfying as eating them. Yes, you can buy greens that have already been washed, cut, and bagged, but then you have no way of judging if they’re good greens (and all too often they aren’t). And even on the outside chance that they’re good, they’ve been cut by a machine, tough, inedible stem and all—which pretty much ruins them.

If you missed out on that ritual, or succumbed to the convenience of those bagged greens and spent half your time at the table picking woody bits of stem out of your dinner, you may not fully appreciate that there is no reason to limit this lovely winter vegetable to just one day in the year. Take a little time to make them well, and you’ll rediscover that it wasn’t just because they were one of the few green vegetables available during the winter that made collards a staple on Southern tables throughout the season.

To feed six to eight people, you’ll need about two heads of collards (in much of the South, they’re bundled two heads to a bunch). Look for a rich green color with no yellowing at the edges, firm, crisp leaves, and rigid stems. If you can’t cook them right away, remove the tie, trim the bottom of each head, then half fill a stockpot with water and let them stand in it until you can cook them.

To prepare them for cooking, half fill the sink with cold water. One at a time, detach each leaf at the base of its stem from the core stalk, put the stem between your index and middle finger right at the base of the leaf, then gently grasp the leaf and strip it from the stem. The stem will break at the point that is tender enough to eat. Drop the leaf into the water, and repeat with the remaining leaves until all the collards are stemmed. Discard the stripped stems and core stalk.

Wash the collards in the water, drain, and repeat this. If they’re very sandy, you may have to wash them a third time. Now stack three to five leaves on a cutting board. Roll the stack up like a cigar and cut the collards crosswise into ribbons no more than an inch wide.

Trim, split lengthwise, peel, and thinly slice a large yellow onion, then lightly crush, peel, and mince a couple of cloves of garlic. How many will largely depend on your own taste, but do remember that the greens are the star here, not the seasonings. Trim the excess fat from a thick, whole slice of uncooked country ham and cut it into four or five pieces.

Put a couple of tablespoons of bacon drippings, olive, or vegetable oil in a seven or eight quart enameled iron Dutch oven or wide, heavy-bottomed stockpot, add the onion, and warm it over medium heat. Sauté until the onion is golden, then add the garlic and sauté until it is fragrant, about half a minute longer. Add the ham and toss until it loses its raw, red color. Now start adding the collards by the handful, stirring until each handful is bright green and wilted. When all the greens are in the pot, add enough water to barely cover them. Season liberally with salt and several generous grindings of black pepper, and if you like, add a small whole dried pod of hot pepper. Taste the greens, and if they don’t taste slightly sweet on their own (they should), add a spoonful of raw sugar.

Bring the pot to a simmer, reduce the heat, and simmer until the collards are tender. This could take as little as half an hour or as much as half an hour: it all depends on the greens. When they’re almost ready, taste and adjust the seasonings and let them simmer a few minutes longer. Served with hot, crusty cornbread slathered in good butter, collards are a deeply satisfying meal all on their own, but they also compliment just about any poultry, pork, or game meat.

I also enjoy the preparation process with collards. It's quite meditative for me!

As Vertemae Grosvenor puts it so well, fixing a mess of greens just chills me out.

Your method is so much like my mom and grandmother's way. They always added a few splashes of pepper sauce instead of a pepper pod, and always added the tiniest bit of sugar. We do love collards at our house, and tend to eat them often. We especially love having them with fish or seafood. One of my husband's favorite meals is grilled salmon, cheese grits and collards.