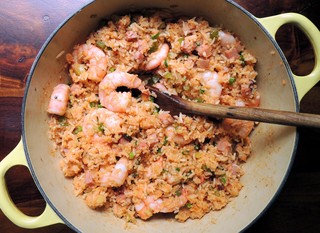 Whether you call it pilau, pilaf, perlow, paella, or jambalaya, in the end, it all amounts to the same thing.

The techniques used vary slightly from dish to dish and the type of rice may differ—a paella, for example, is made with a short-grained rice whereas a pilau is made with long-grain rice. The other ingredients will vary depending to where the dish originated and where it has migrated, but these differences are really incidental. Rice is simmered in an aromatic liquid with enough fat to keep its grains separate.

All the variations most likely have their roots in the ancient Persian pilaf, a culinary idea that spread around the Mediterranean and into Africa by way of the Ottoman Empire, and from there, to our Western Hemisphere by way of European colonization and the African slave trade.

In the South, the two primary versions of the dish are the Creole Jambalaya of Louisiana and the Pilau (or perlow, if you prefer the colloquial variation) of the South Carolina and Georgia Lowcountry. There is paella in the parts of the South that touch the Hispanic cultures of the Caribbean and Latin America, but it really had no substantive place in Southern cooking until modern times.

There are Louisianan and Carolinian cooks who would argue that the two dishes are not at all the same, but while there are a few old recipes for jambalaya whose proportion of liquid to rice would make for a rather soupy dish unless it was cooked like a paella in a wide, open pan, the techniques involved, and proportion of liquid to rice, are virtually the same. The only substantive differences are the two names and the seasonings.

This might as easily be called a Shrimp Pilau in the Carolina and Georgia Lowcountry, since their techniques and most of their ingredients (including the onions, peppers, and celery, that so-called “holy trinity of Creole cooking”) closely parallel one another.

1. Put the butter or oil in a heavy-bottomed Dutch oven, preferably enameled iron, over medium heat. Add the onions, bell pepper, and celery and sauté, tossing often, until they’re softened and beginning to color, about 5 minutes. Add the ham and toss until it’s hot through and barely beginning to color, about 2 minutes more. Add the garlic, thyme, and hot pepper flakes and sauté until fragrant, about 1 minute.

2. Stir in the rice and stir until it’s well-coated with fat and hot. Add large pinch of salt and a few generous grindings of pepper then stir in the broth and tomato paste. Add the bay leaves, let it come to a boil, and reduce the heat to a slow simmer. Simmer until the liquid is nearly absorbed, about 8-10 minutes.

3. Scatter the shrimp over the rice, cover tightly, and turn down the heat as low as can be managed. Steam until the rice is tender and the shrimp are curled and pink, about 8-10 minutes longer. Add the green onions and gently fold them and the shrimp into the rice. Remove and discard the bay leaves, sprinkle with parsley, and serve immediately.