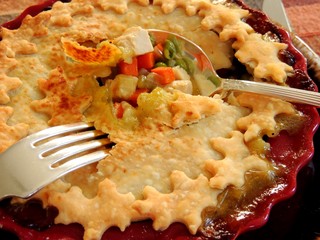 My Chicken Pot Pie, with carrots, celery, onions, and peas and a basic pastry topping

One of the most welcome of all supper dishes on a crisp autumn evening is old-fashioned chicken pot pie. For warming comfort it may have its equals, but it has no superior.

Like so many homey dishes of its kind, there are probably as many versions as there are cooks, ranging from the elegantly simple triad of chicken, gravy and pastry to those loaded with vegetables, herbs, and spices. Some are even embellished with hard-cooked eggs and ham.

Some are made only with a whole chicken that was cooked specifically for the pie, while others are only made when there are leftovers that need using up.

Some contain no other vegetables than onions, while others include a combination of carrots, celery, potatoes, sweet peas, and even parsnips. For some cooks garlic would be frowned upon as out of place; for others, it wouldn’t be a pot pie without it.

And then there’s the pastry: Some are topped with be a raised pastry, a biscuit-like crust that’s often used for cobblers, others with regular pie dough, and still others (especially historical versions from the nineteenth century) with an elegant and showy puff pastry.

We could go on, but the point is, there are endless ways to make a good pot pie, and that variety is a part of its real beauty: it can and should be tailored by the tastes of the cook to suit not only the occasion but, most important of all, the people for whom we cook.

This is my own basic chicken pot pie. It may vary a little depending on the time of year, what’s in my pantry, refrigerator, and herb pots on the back steps, and on who’s going to be at our table, but the core stays pretty much the same.

Sometimes it gets fancied up with puff pastry (usually when to use up puff pastry leftover making something else), but mostly it’s a basic plain pastry, since I don’t really care for that raised, biscuit-style crust. Still, however I make it, I never lose sight that homey comfort is the object.

Pot pie is at its best when made with a chicken that has simmered in broth that’s in turn used to make the binding gravy, but a quick and perfectly satisfactory version can be made with leftover roasted poultry or a market-cooked rotisserie chicken.

1. Position a rack in the center of the oven and preheat the oven to 400° F. Put the butter and onion in a heavy-bottomed deep skillet or wide, 3-4 quart pot over medium heat. Sauté, stirring often, until softened and translucent, about 3-4 minutes, then add the carrot and celery. Sauté, tossing, until softened and beginning to color, about 3-4 minutes more. Add the chopped sage and parsley and sauté until fragrant, about half a minute.

2. Sprinkle in the flour and stir until it’s bubbly and smooth. Slowly stir in 3 cups of broth, bring it to a simmer, and simmer until thick. Season with salt (as needed), pepper, and a fresh grating of nutmeg, and simmer 5 minutes. Add the diced chicken and peas, bring it back to a simmer and simmer 3-5 minutes. Taste and adjust the seasonings and transfer to 4 individual potpie dishes or 10-ounce ramekins.

3. Roll the dough out 1/8 inch thick on a lightly floured work surface. Cut it into rounds a little larger than the dishes you're using. With a small decorative cutter, cut out the center of each and place the pastry over the filling. Use the same cutter to cut the excess pastry into decorative shapes, brush the bottoms with water, and arrange them around the edges. If you want a showy, glossy finish to the pastry, brush it with the diluted egg white.

4. Bake in the center of the oven until the pastry is golden and the filling is bubbly at the center, about 30-35 minutes.

For pot pies, creamed chicken, and casseroles such as chicken spaghetti.

1. Cover the bottom of a wide Dutch oven or deep braising pan with the onion, carrot, and celery. Lay the chicken over it skin up and sprinkle lightly with salt. Add enough broth to barely cover the chicken and put in the sprigs of sage and parsley, bay leaf, and ginger. Bring it to a simmer over medium high heat.

2. Reduce the heat to a slow simmer, loosely cover, and cook until the chicken is tender, about 30-45 minutes. Remove the chicken, let it cool, then skin, bone, and cut the meat into bite-sized pieces. Strain and reserve the broth, discarding the solids.

2. Gather pastry into two balls, press each one into a 1-inch thick flat disk, and cover with plastic wrap. Refrigerate at least 30 minutes or for up to 2 days. Let come to room temperature before rolling out.

Sounds simply wonderful. Can’t wait to try your recipe. Thanks for sharing.

Thank you, sweet Melody! I hope you enjoy it. We had them while watching "Young Frankenstein" . . . 'tis the season!