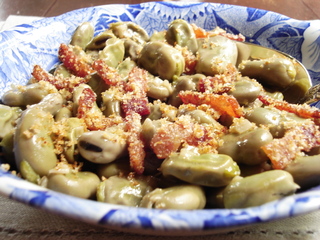 fava not quite alla Randolph or Romana

Last year, a cache of fresh fava beans inspired a dip into Mary Randolph’s lucid recipe for these ancient legumes in her iconic book, The Virginia House-wife (see 10 May 2011: Fava alla Randolph):

This is the smallest and most delicate species of the Windsor bean. Gather them in the morning, when they are full-grown, but quite young, and do not shell them till you are going to dress them. Put them into boiling water, have a small bit of middling, (flitch,) of bacon, well boiled, take the skin off, cover it with bread crumbs, and toast it; lay this in the middle of the dish, drain all the water from the beans, put a little butter on them, and pour them round the bacon.”

“When the large Windsor beans are used, it is best to put them into boiling water until the skins will slip off, and then make them into a puree as directed for turnips—they are very coarse when plainly dressed.”

At the farmers’ market this morning, a bin of young fresh fava invited me to return to Mrs. Randolph with a fresh eye. Contrary to my original assertion that it shared a lot in common with the Romans’ fava alla guanciale, her treatment, while it had mostly the same ingredients, was exquisitely simple by comparison.

Instead of using salt-cured pork as a seasoning, Mrs. Randolph directed that the beans and pork were to be cooked separately. The pork, coated with crumbs, toasted, and served up in the center of the dish – was really more of a condiment than a seasoning. In fact, other period cookbooks admonished that while Windsor beans are always served with bacon, they should never be cooked together. So much for its resemblance alla guanciale.

Suddenly, the sharp things I’ve had to say about over the years about students who ask silly questions because they haven’t listened or read the recipe properly came back to haunt — not to mention historians who see what they want to see despite the evidence before them.

Chagrined, I took Mrs. Randolph’s recipe back into the kitchen. Alas, hunks of middling (salt cured side meat) are no longer a standard pantry store in American kitchens, including mine. And in spite of it all, I still prefer to braise these beans rather than boil them, so the final result ended up somewhere between Mrs. Randolph’s original intentions and my own.

Count on about a cup of shelled beans from each pound.

1. Shell the beans and rinse under cold running water. Put a tablespoon of the butter and shallot in a wide, lidded sauté pan or skillet over medium heat. Sauté, stirring occasionally, until the shallot is translucent and beginning to color, about 4 to 5 minutes.

2. Add the beans and season well with salt and pepper, both to taste. Add enough water to barely cover them, bring it to a boil, then cover and reduce the heat to low. Simmer gently until tender, between 6 and 15 minutes depending on the age and size of the beans.

3. Meanwhile, cook the bacon in a small pan until it is browned but not crisp. Remove and drain it on absorbent paper. Spoon off all but a teaspoon of the fat and add 2 tablespoons of dry breadcrumbs. Stir until they are lightly toasted and turn off the heat. Return the bacon to the pan and toss until it is coated with crumbs.

4. If, when the beans are tender, the liquid remaining in the pan is still thin, uncover, raise the heat, and quickly evaporate it to a thick sauce. Turn off the heat, add the remaining butter, and shake the pan to evenly coat the beans with the sauce. Pour them into a warm serving bowl, sprinkle with the bacon, and serve immediately.

If they have Windsor beans at our farmers market this weekend, I plan to try this, Damon. It sounds wonderful.

It is, even if I say it myself and even if Queen Molly wouldn't approve of it.