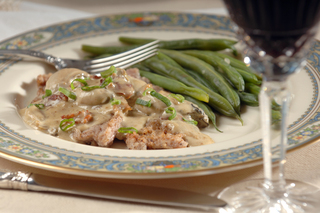 Lowcountry Veal Scallops with Oysters and Bacon, photography by John Carrington
One of the great, sumptuous splurges of autumn in the Carolina/Georgia Lowcountry, as our oysters come into season, is their pairing with veal cutlets. Given the prices that veal fetches these days, it’s hard to imagine that such a thing has not always been a splurge.

Before dairy practices changed around the time of World War II, however, veal was common, cheap, and even considered a bit dull. Georgia’s antebellum cooking authority Annabella Hill went so far as to call it “insipid.” Our colonial and antebellum ancestors would have been amused to see turkey and chicken breast cutlets (an expensive luxury in their day) suggested as a less expensive and even inferior alternative for veal.

Since that meat was for them as common as it was ordinary, they naturally found many ways to enliven it and give it variety. One such way was to pair it with oysters.

Before pollution and over-harvesting compromised local oyster beds, this shellfish was even more plentiful and cheap than veal, so it was only natural that the bounty would be put to use enlivening the everyday joint. While the mating didn’t of course originate here (in Europe it long predates Western colonization), our local oysters are intensely briny and yet sweet and delicate, making the match downright magical.

Unhappily, nowadays veal of any sort (but especially that from humanely treated, free-range animals such as our ancestors would have known) is neither cheap nor plentiful, and while our oyster beds are recovering, local oysters are still at a premium. Never mind: when they’re in season and good veal can be had, bringing the two together is still well worth it.

What follows is my own adaptation. I’ve not been able to date the original with any certainty. In Mrs. Hill’s recipe, one of the oldest Georgia renditions I’ve found, the cutlets were fried in lard and the gravy was thickened with breadcrumbs soaked in oyster liquor. No bacon; no cream; what a shame.

While this is good with any oysters, Carolina/Georgia cluster oysters really make it sing. If you use them, hold off on the salt: the oysters and bacon should provide all you’ll need.

1. Drain the oysters in a wire sieve over a glass bowl to catch their liquor. Spread a wax paper or plastic wrap on a flat, sturdy work surface. Put the veal on it, cover with a second sheet, and lightly pound with a mallet or scaloppine pounder to about ¼-inch thick. Season lightly with salt (or omit if your oysters are very briny) and generously with pepper.

2. Put the bacon in a large, heavy-bottomed skillet that will hold the veal in one layer without crowding. (If you don’t have a large enough pan, cook the veal in two batches.) Over medium heat, sauté, stirring often, until lightly browned and most of its fat is rendered. Remove and drain it on absorbent paper. Raise the heat to medium high. Lightly roll the veal in flour, shake off the excess, and add it to the pan. Cook, about 1 minute per side, until lightly browned. Do not overcook; it should still be pink at the center. Remove to a warm platter and keep warm.

3. Add the oysters to the pan and toss gently until they plump and their gills begin to curl, about a minute. Remove them to a bowl with a slotted spoon and add the bourbon. Let it almost evaporate. Add ½ cup of reserved oyster liquor, bring it to a boil, stirring and scraping to loosen any cooking residue, and cook, stirring frequently, until lightly reduced. Add the cream, bring it to a boil, and cook briskly until lightly thickened, about a minute.

4. Reduce the heat to medium low, return the veal, bacon, and oysters to the pan and turn the veal several times in the sauce until lightly coated and just warmed through. Immediately take them up to the platter, sprinkle with green onion, and serve at once.
Be the first to comment