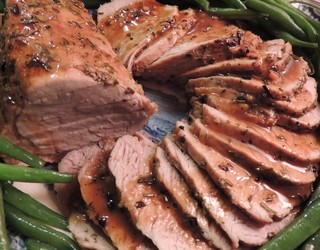 One is always learning: a couple of weeks ago, supper was something I’d made hundreds of times—pork tenderloin pan-roasted with garlic, rosemary, and white wine. That lean little cut is great for two people on a busy work night: it has very little waste, is just enough for us to have two meals from it, cooks quickly, and, as its name implies, is always tender, even when it’s accidentally overcooked.

Unfortunately, it’s also the pig’s least flavorful and interesting cut, so I like to boost its flavor with that classic Mediterranean flavor triad, since it never fails to give the meat a welcome lift. It doesn’t hurt that it also whispers reassuringly of autumn, my favorite time of year.

Until that evening, I had habitually rubbed the chopped garlic onto the meat along with the salt, pepper, and rosemary before it went into the pan. The trouble with doing it that way is that by the time the meat gets sufficiently brown, the garlic is too brown, and often beginning to burn, lending a bitterness that over time I’ve found less and less easy to ignore.

Unfortunately, most of us are creatures of habit and far too prone to just keep doing things the way we’ve always done them, ignoring what our palate is telling us. Even (and sometimes especially) seasoned cooks who should know better will fall victim to such habits.

But that evening as I started to season the pork, thinking of (and missing) Marcella Hazan, I suddenly recalled her saying in that famous gravely grumble, “When I walk into a restaurant and smell burned garlic, I turn around and walk out.”

It made me realize that she would very likely have had some pretty harsh words for the aroma in my own kitchen that all too often accompanied the browning step of this roast. It was a sharp reminder that blindly following habit rarely does our cooking any favors. I put the garlic aside and rubbed the pork only with the salt, pepper, and chopped rosemary.

Only after it had been richly browned in good olive oil did I add the garlic to the pan, and only allowed it to turn the palest gold before I quenched it with the wine. Immediately lowering the heat, I covered the pan and let the roast finish in the usual way.

I would like to tell you that the result of that simple change was earth-shaking. It wasn’t; but it did make a distinct difference. The garlic had taken on just enough color to draw out its best flavor without sacrificing any of its sweetness. And the bitter aftertaste that had sometimes marred this otherwise lovely dish was gone.

The first bite brought one of those “aha!” moments that most of us experience when we’re really paying attention to what’s happening in the pan. Had Marcella been there watching, she would no doubt have said, “NOW you are listening to me!”

And, do you know, it’s heartwarming and reassuring that almost a year after her death, if I really listen, she’s still right there beside me, teaching this old dog new tricks.

1 whole pork tenderloin, about 1¼-to-1½ pounds
Extra-virgin olive oil (yes, extra-virgin)
Salt and whole black pepper in a mill
About 1 tablespoon chopped fresh rosemary (do not substitute dried), to taste
2 medium cloves garlic, lightly crushed, peeled, and minced (do not us a press)
About 1 cup dry white wine or ¾ cup dry white vermouth

1. Trim the tenderloin, removing the silver skin with a sharp filet or tourné knife. Wipe it dry with paper towels and rub it well on all sides with salt, freshly-milled pepper, and rosemary.

2. Film the bottom of a heavy-bottomed braising pan or lidded skillet with the oil and warm it over medium heat. When it’s hot, add the pork and gently but thoroughly brown it on all sides (I never time this, but probably about 3-4 minutes per side). When the pork is well-browned, add the garlic and sauté for half a minute, or until it just starts to color and is fragrant.

3. Quench the pan with the wine, lower the heat, cover, and cook, turning the meat once or twice, until it’s done to your liking, about 8-15 minutes, depending on the thickness. In my house, we like it done but still juicy, about 125-135° F. on a meat thermometer (it’ll keep climbing another 5-10 degrees after you take it up). Transfer the meat to a platter and loosely cover it with foil.

4. If the pan juices are not reduced and thick, let them cook down, uncovered, until they’re lightly thickened, almost syrupy. If, on the other hand, they’ve dried up too much, add a little cool water and bring it to a simmer, stirring and scraping the bottom of the pan until it’s lightly thickened. Turn off the heat and pour the sauce into a bowl, scraping the pan well as you do.

5. Thinly slice the tenderloin and arrange it, slices overlapping slightly, on a serving platter. Drizzle it with the pan juices and serve immediately.