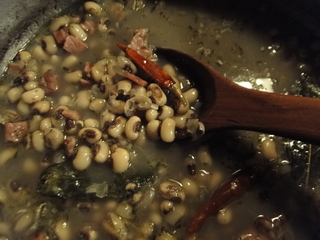 Black-eyed peas, seasoned with ham, onion, garlic, herbs, and hot peppers, are too satisfying and delicious to limit them to one day at the beginning of the year
Though black-eyed peas have become to New Year’s Day what turkey is to Thanksgiving, the uniquely marked field pea with one of the most evocative names in the vegetable kingdom is a year round staple for Southerners. And while they’re commonly associated with humble tables (the superstition associated with having them at new year is that beginning the year with such “humble” fare will bring prosperity), they really know no social, ethnic, or economic boundaries.

Most likely, that’s because a hearty pot of field peas is at once the simplest and yet most satisfying things that one can have on a cold winter day. Moreover, I love the ritual of making them: like cooking a pot of greens, preparing the peas for the pot, sorting, washing, and soaking them is relaxing and calming, and as they simmer slowly with their seasonings, the aroma that fills the house warms and comforts like nothing else.

Food scientists now tell us that there’s no reason to pre-soak field peas, and it’s probably true, but I like the ritual of sorting, rinsing, and soaking, and, while it may just be psychological, I do think the peas tend to stay whole and have better texture when they are presoaked.

Take a pound of peas, spread them on a rimmed sheet pan, and pick out any damaged or discolored peas. Put them in a colander and rinse them well under cold running water, tossing gently to make sure they’re all rinsed. Transfer them to large (at least four-quart) enamel-lined or stainless steel pot and cover them with water by about an inch. Set them aside until the peas are doubled in size.

Meanwhile, trim the excess fat from a whole, thick slice of uncooked country ham and cut it into half-inch dice. Trim, split lengthwise, and peel a medium-sized yellow onion, then cut it into small dice. Lightly crush, peel, and mince 2-3 cloves of garlic (how much will depend on your own taste).

When the peas have doubled, add enough water to cover them by two inches and put the pot over medium heat. Also put on a teakettle full of water to a boil, and then keep it simmering in case you need to replenish the broth. Never add cold water to the peas. Bring the peas slowly to a simmer, skimming away the thick foam that rises, and simmer until the peas are almost tender. Depending on how old the peas are, this can take from as little as twenty minutes to as much as forty-five, but remember that they will undergo further cooking, so don’t let them get too soft.

Now add the ham, onion, garlic, one or two whole pods of hot pepper (left whole), to taste. Leaving them whole infuses their flavor without releasing too much of their heat), a couple of bay dried leaves, or one if fresh, a large sprig or two of thyme or generous teaspoon of crumbled, dried thyme, and season generously with salt and a few liberal grindings of black pepper. If there isn’t much broth, replenish it with boiling water—enough to cover the peas by an inch.

Simmer until the onions and peas are tender and the broth and peas are deeply infused with the seasonings. You can make them completely ahead—in fact, they’re even better the second day. Let them cool, transfer them to a storage container, cover tightly, and refrigerate. Reheat them slowly over medium low heat. In the Lowcountry, we often have them over rice, but where I grew up, a crusty cake of skillet cornbread always accompanied field peas, so I usually have both.
Be the first to comment