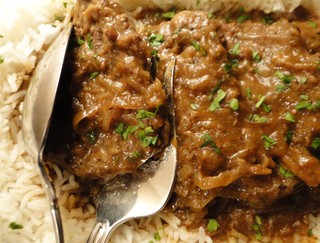 Country Style Steak, served in the Lowcountry way on a fluffy bed of rice

When the weather turns cold and damp, as it has this week, or simply when we just need comforting, nothing answers in my household like this simple but deeply satisfying dish of tenderized round steak slow-simmered in an aromatic gravy. Originally called beef “collops” (the old English word for sliced meat), this dish goes back at least to the mid-eighteenth century, and as its contemporary name suggests, has long been a staple of farm kitchens all across the South.

Possibly nothing else in all Southern cooking is as misunderstood and unjustly maligned as this simple, lovely dish. The method is the same as veal scaloppini with an important exception: After the initial browning, the meat is given a slow tenderizing simmer necessary for older, tougher beef. This has a distinct flavor advantage in that slow simmering concentrates the flavors. My mother always made this with water, since she never made broth unless she was going to turn it into soup. Many modern cooks use canned broth, but if you choose that route, cut it with an equal part of water so that it doesn’t leave the gravy tasting “tinny.”

1. Cut the steak into pieces 3-inches across. If you are using round steak, pound them with a textured mallet, a multi-bladed tenderizer, edge of a saucer to just under ¼-inch thick. Season generously with salt and pepper.

2. Heat the fat and oil in a lidded cast iron or heavy-bottomed skillet over a medium-high heat. Roll the beef lightly in flour, shake off the excess, and add them to the pan. Brown well on both sides and remove them to a warm plate. Add the onion to the pan and sauté, tossing often and scraping the pan to loosen any fond that may have accumulated on the bottom, until the onion is softened and golden, about 5 minutes.

3. Sprinkle a tablespoon of flour over the onions and stir until smooth. Cook, stirring constantly, for about a minute, then slowly stir in the broth and raise the heat to high, scraping and stirring constantly until it comes to a boil. Return the steaks and any juices that have collected in the dish to the pan, add a splash or so of the ketchup or Worcestershire, to taste, then cover and lower the heat to a slow simmer. Simmer, occasionally stirring and turning the steak, until it’s fork tender and the gravy is thick enough to suit you, about 30 to 45 minutes. If it seems too thick, thin it with a little water. Remove the meat to a warm platter. Taste the gravy and adjust the seasonings, and pour it over the meat. Serve at once.

In the Carolina or Georgia Lowcountry, this dish is served with rice. Elsewhere you might get mashed potatoes, or grits. In her eighteenth century household receipt book, Charleston matron Harriott Pinckney Horry added a handful of morels near the end of the simmer. You could follow her lead if you wanted to dress it up.