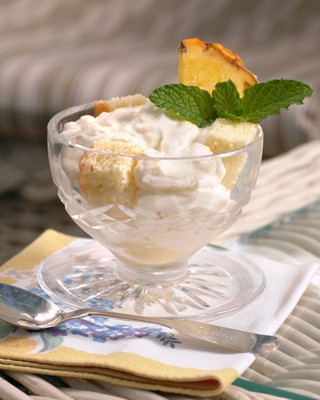 A Savannah Pineapple Charlotte, photographed by John Carrington for The Savannah Cookbook

My mother got a pineapple for Christmas. Even though canned pineapple and refrigerated shipping have made this fruit fairly commonplace these days, for Mama—and for us—that pineapple, with its prickly, tufted skin and vibrant crown of sword-like leaves still had an air of the exotic about it.

There was a time in my mother’s living memory when a fresh pineapple was a special treat and she has never let us take them for granted.

My mother’s sense of reverence for this fruit hearkens back to a time when they were so exotic that they became the ultimate symbol of prosperity and gracious hospitality. In old Charleston and Savannah, stylized pineapple carvings were a common ornament for front door pediments and garden gateposts, and were often worked into the detailing of the doorjambs, knockers, and ironwork that embellished the tall, elegant townhouses of the elite. In those days, when the real fruit appeared on the dessert board, it marked a truly special occasion.

But by the time Harriet Ross Colquitt set down her version of an old Savannah standby, Pineapple Charlotte, in The Savannah Cook Book of 1933, she did so in a very off-hand way, calling it a “simple and very good dessert.” Simple it certainly is, but when it first appeared on Savannah tables, it was a luxury to savor.

By Mrs. Colquitt’s day, canning had made pineapples familiar and even a little ordinary. The familiarity bred in the three quarters of a century since hasn’t helped. But as Mama carefully trimmed the bright crown and cut into its rough, almost reptilian skin, exposing golden flesh and releasing its heady tropical fragrance into her kitchen on that cold, gray morning, that pineapple was still a Christmas treat to treasure and savor.

Mrs. Colquitt’s Pineapple Charlotte isn’t really a Charlotte, but more of an old-fashioned fruit fool, but never mind: the elegance of her name for it seems far more appropriate. This is an exquisitely simple and appropriately respectful treatment for a fruit whose lusciousness cannot be diminished by familiarity. The recipe, though sketchy, was fairly straightforward. All I did when I shared it in my own Savannah Cookbook was fill in details.

And as we wait for spring, this simple dessert brings a welcome hint of the tropics to the table.

1. Stand the sponge cake strips or ladyfingers 3 pieces per serving along the sides of 8 parfait glasses, footed compotes, or dessert bowls. Crush 1 cup of the pineapple to a pulp with a potato masher or in a food processor fitted with a steel blade. Combine it with the chunk pineapple and sweeten it with sugar to taste, beginning with ¼ cup and adding more as needed. Let stand for at least 15 minutes.

2. In a cold glass or stainless steel bowl, whisk the cream until frothy and thick. Sprinkle with 3 tablespoons sugar and whip until it holds firm peaks. Fold in the crushed and chunk pineapple. Taste and adjust the sugar. Spoon it into the prepared glasses or bowls, mounding it a little on top, and chill until very cold and set, at least 2 hours.

3. Just before serving, garnish each serving with a pineapple wedge and sprig of mint.