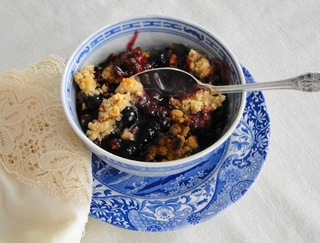 Here in Southeast Georgia, the early blueberries from Florida and the southernmost end of our state are already coming to the market. Though blueberries are one of my favorite fruits, I can usually resist the earliest ones: picked a bit unripe and shipped in from South America or even South Florida, they’re almost always a disappointment.

But this weekend pints of deep, blue-purple berries from Florida were on sale, and were so plump and lovely that they were irresistible. They were still not quite right for my favorite way of having them – right out of my hand, but they were just right for an old-fashioned blueberry crumble.

Crumbles are part of an old family of fruit desserts that are basically deep dish fruit pies: variously called cobbler, crisp, crumble, grunt, and slump, they’re mostly distinguished from one another mainly by their toppings (except that grunts, unlike their sisters, are steamed). Of all their odd names, only crumble makes immediate sense: its topping is a crumbled mixture of flour and butter. The origins for them are lost in time, but in America they go back at least to the beginning of the nineteenth century.

Never mind the history: the great thing about a crumble is that it’s a pastry that is virtually foolproof. The crisp, buttery topping that makes such a perfect foil for the fruit filling can be put together literally in not much more than a minute, and requires absolutely no skill of the cook.

This recipe is for my young friend Merideth Rasplicka, who asked for it.

1. Position a rack in the center of the oven and preheat it to 375° F. Wash, drain, and pick over the berries to remove any stems and blemished fruit. Put it in a glass or stainless steel mixing bowl and add the sugar, cornstarch, 1 teaspoon of the cinnamon, and the nutmeg. Grate in the zest from the lemon. Toss well, taste a berry, and if they are not very tart, halve the lemon and add a squeeze of lemon juice, as needed.

2. Lightly butter a shallow 2 quart casserole and pour in the fruit. Wash and dry the mixing bowl, put in the flour, remaining cinnamon, and brown sugar, and toss until well mixed. Add the butter and cut it in until the mixture resembles course meal, with lumps no bigger than very small peas. Sprinkle it over the fruit.

3. Bake until golden brown and the filling is bubbly in the center, about 45 minutes.

It will be a while yet before we start picking blueberries here in NY, but when we do I will definitely try your recipe. Looks delicious! Thanks! xoLinda