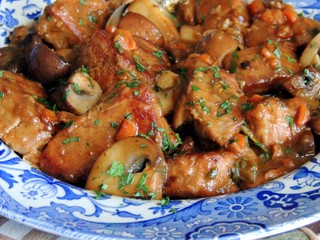 Winter in the Carolina and Georgia lowcountry is rarely what one could call harsh, but the last week or so has been unusually mild even for us—more like late spring than the dead heart of winter. But we know that those balmy whispers of spring are fleeting and can never be trusted. And, sure enough, this weekend the temperatures have once again dropped.

It’s still not what a New Englander would call cold, but it’s blustery enough to make us crave heartier fare, something that will not only warm us in the moment, but stick with us for a long time. And when that kind of craving comes calling, nothing answers it better than a good stew.

One of my own favorites is this richly aromatic ragout of veal inspired by that timeless bible of Lowcountry cookery, Sarah Rutledge’s The Carolina Housewife, published in 1847. Although we think of veal as a luxury food, in Miss Rutledge’s day, it was actually cheaper than other meats, and was commonplace on Charleston and Savannah tables and needed to be “dressed up.”

Miss Rutledge’s recipe was for a breast of veal which was first stewed with herbs, onion, spices and lemon peel. It was then boned, floured, and browned in butter before being returned to the stewing liquid that had in the meantime been cooked down with the bones. Further enriched with catsup (not tomato catsup, but rather one made from mushrooms, anchovies, or oysters), a small amount of white wine, chopped carrots, mushrooms, and potatoes, it was served forth garnished with lemon, sweetbreads, and forcemeat balls, the latter two having been first browned in butter.

My own version is somewhat streamlined and uses much less expensive chuck or shoulder. Actually, since nowadays even budget cuts of veal can be pricy, more often than not, I don’t use veal at all, but pork shoulder, which is actually the meat used in the stew that’s pictured here.

I don’t follow Miss Rutledge religiously, but flour and brown the meat first, then stew it with all the aromatic flavorings added at once. If you’re using pork shoulder rather than veal, know that it will take a lot longer to become fork tender, so allow at least twice as much stewing time.

1. Trim the meat of excess fat and cut it from the bones. Set the bones aside and cut the meat into 1-inch cubes. Warm the butter in a braising pan or Dutch oven over medium heat. When the butter is bubbling, raise the heat to medium-high, lightly roll a third of the meat in the flour, shake off the excess, and add it to the pan. Brown well on all sides, turning often, about 2 minutes; remove it with a slotted spoon or tongs. Repeat this with the remaining meat in two batches, then add and brown the bones.

2. Add the onion and sauté, tossing constantly, until translucent, about 2 minutes, then add the carrot and sauté until the onion is golden, about 2 minutes longer. Add the mushrooms and sauté until they’re beginning to color, then add the garlic and lemon zest and toss until fragrant, about a minute more. Return the meat, its accumulated juices, and reserved bones to the pan; season well with salt and a liberal grinding of pepper. Add the mace or a liberal grating of nutmeg, the wine, stirring well, and let it come to a boil.

3. Add the broth, bring it back to a boil, then reduce the heat to low, cover, and simmer, stirring occasionally, until the meat is fork-tender, about 1 hour for veal, 2-2½ hours for pork. If at any point the stew appears to be getting too dry, add water: Don’t add more wine or broth. If, on the other hand, when the meat’s done, you find that the sauce seems thin and watery, remove the meat, turn up the heat, and cook rapidly until it has reduced and thickened, stirring often to prevent scorching. Taste and adjust the seasonings and turn off the heat. If you’ve removed the meat to cook down the sauce, return it to the pan and gently toss to coat it.

4. Remove and discard the herb bundle, zest and bones. Transfer the stew to a wide, shallow bowl, rimmed platter, or tureen, garnish with parsley and, if you like, sliced lemon. Serve at once. If you’d like to enjoy it as they did in Miss Rutledge’s day, pass steamed rice separately.

Notes: If you’ve opted for pork, allow at least 2 hours of simmering. If you like, you may also use meaty veal shanks cut about 2 inches thick. (Choose smaller shank pieces for this, allowing 4 to 8 depending on their size; the larger ones are from the joints and look meatier, but have less meat, being mostly bone and connective tissue.) Cook the shanks whole, without removing the bones. They will take longer than the smaller, boned pieces of veal—at least 2 hours. Serve them whole with a little of the sauce spooned over them.