1 August 2018: The Joys of Summer Minestrone 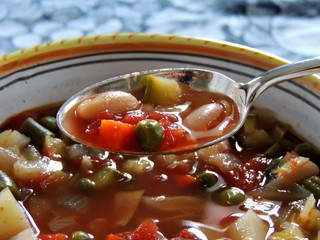 In all of cooking, nothing satisfies me in the summer, both in the making and the eating of it, quite the way that a pot of vegetable soup always does. Whether it’s my best shot at reproducing my grandmother’s soup (something I have never quite succeeded in doing) or a classic minestrone alla romana, it’s my idea of the ultimate summer comfort food.

Whenever I manage to get home for a visit, it’s the first thing Mama and I make together. It’s never exactly the same: The base is always tomatoes, onions, and okra, but while she was still gardening, we’d add whatever was ready to be harvested supplemented by the stash from two enormous chest freezers in the garage.

If my father isn’t going to share it, we add green or speckled butterbeans, but if he’s partaking, we cook them separately and add them to our own portions. If it can be had, we add fresh corn. Sometimes we eat with cornbread, sometimes only crackers. But either way, we have it hot only when it’s first made. Thereafter, we have it cold (that is, just under room temperature).

The comfort that that soup offers is closely tied to being with my mother in her kitchen, but even when I’m making vegetable soup in my own kitchen alone, there’s something deeply satisfying in the ritual. It doesn’t matter what kind of vegetable soup it is: It might as easily be my mother’s or grandmother’s soup, the okra soup that is a signature of my adopted home in the Georgia lowcountry, hambone soup from other parts of the South, or the one I seem to turn to most often—the minestrone I fell in love with in Italy.

Of all the many parallels between Italian and Southern cooking, none is more salient than the vegetable soup pot. Just like that soup my mother and I make, minestrone is more an idea than a recipe. Each province of Italy has its own version: In Liguria, mushrooms, eggplant, and herbs perfume the bowl, although our cook, Ilda, whose minestrone was the first I had, was simpler, and more like that of Romana. In Tuscany, it’s hearty with macaroni and beans; in rice-loving Lombardy, there’s always a spoonful of their prized short-grain rice in the bowl; in other places, it will contain salt pork, just as our own vegetable soup often does.

The ingredients also change with the seasons: in the spring, it may contain peas, artichokes, fava beans, young leeks and even lettuce, in mid-to-late summer, it may include eggplant, in fall, hefty winter squash and sturdy kale or other fall greens.

While the ingredients for vegetable soup in Italy and here in the South may differ from place to place, the thing they share in common is that no one element is allowed to dominate, but is carefully balanced with the others. The other thing they share is that their ingredients are added in stages. In Italy, the vegetables are prepared one at a time and added gradually to simmering butter or olive oil before broth is added. In most of the South we put them directly to the broth, but in the same gradual way.

When I first started making minestrone in my own kitchen, it was with two guides: the taste memories from our Genoese cook Ilda’s lovely soup and Marcella Hazan’s lucid recipe in The Classic Italian Cookbook. They’re still the standard by which I measure it.

Allow about half an hour to forty-five minutes to assemble the soup. The process is very relaxing and satisfying so long as you’re not in a hurry or a bad mood, so get with the program first.
Serves 6 to 8

1. Trim the root and stem from the onion, split it in half lengthwise, pull off the peeling and cut it into small dice. Put the butter, oil, and onion in a heavy-bottomed flame-proof casserole or Dutch oven (enameled cast iron is ideal) and put it over medium-low heat, stirring until the onion is coated. Let it simmer while you prepare the celery.

3. While that simmers, wash, top and tail, and string the green beans. With a sharp knife, slice them crosswise ¼-inch thick and add them to the pot. Stir well, and, while that simmers, scrub, trim and dice the zucchini roughly the same size as the beans. Add it to the pot, stir, and let it simmer while you prepare the cabbage.

4. Remove the dark green leaves from the cabbage and, with a sharp knife, dice enough of it to make a heaping cup. Stir that into the pot and let it simmer while you wrap the remaining cabbage well and refrigerate it for another use, then prepare the potatoes.

5. Peel and dice the potatoes and add them. Stir and simmer just until they’re hot through. Ladle in 6 cups of broth and while it comes to a simmer, put the tomatoes in a heatproof bowl, cover them with boiling water and let them stand 1 minute, then drain, peel, and seed them over a sieve set in a bowl to catch their juices. Roughly chop and add them and their juices to the pot.

6. Add the cheese rind and a large pinch of salt. Bring it to a boil, lower the heat to a gentle simmer, and simmer, stirring occasionally, for 2 hours. If you’re using cooked dried cannellini and fresh peas, add them after the first hour. If it gets too thick, add homemade broth as needed or, if you’re using canned broth, water.

7. If you’re using canned cannellini, drain and rinse them and add them after 2 hours along with the thawed frozen peas. Let it come back to a simmer and cook gently another 30 minutes to an hour, again adding broth or water if it gets too thick. Taste and adjust the salt as needed, and simmer a few minutes longer to let it meld.

8. Remove the cheese rind. (Some dice it and add it back to the soup, since it’s just the hardened outer surface of the cheese and is completely edible. But it never makes it to the table in my kitchen.) To have it hot, ladle it into heated bowls and pass grated cheese and bread separately. To have it cold (or if you’ve made it ahead) uncover and let it cool to room temperature. Cover and refrigerate until needed but let it sit at room temperature for half an hour before serving it. Thin it with cool water as needed. If you have it, a spoonful of pesto is a welcome addition, especially if you’re having it cold.

The foundation a good minestrone is good homemade broth, and the only way to get that is to make it. In traditional kitchens in Italy, broth is made from a variety of meat scraps and bones, not just one. Relax: it takes very little effort, requires almost no attention from the cook, and smell heavenly while it’s cooking.
Makes about 2 quarts

1. Put all the ingredients and 3 quarts of water into a 6-quart pot. Put it over medium low heat and bring it slowly to a simmer, skimming the scum as it rises. Adjust the heat to a bare simmer, loosely cover, and simmer for at least 3 hours. It should be reduced down to about 2 quarts of liquid. I often let it simmer all day, adding water if it gets too reduced.

How did you read my mind? I was just thinking of vegetable soup after making vegetable broth this weekend. Now I have some new recipes to try. Thank you!