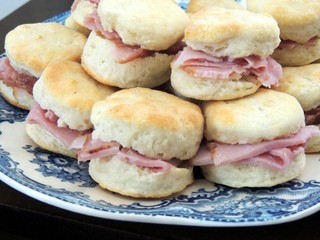 We’re finally at Labor Day weekend and, at least where our somewhat quixotic late-summer weather is cooperating, many of us will be marking summer’s last official hurrah by packing a picnic hamper and blanket and heading for the beach, local park, some picturesque country landscape, or at the very least the back yard. Mind, here in the South, we’ll be able to picnic until well into October, but there’s just something about marking the end of summer by symbolically eating outdoors “one the last time.”

Magazines, newspapers, food web sites, and the air waves are full of helpful ideas for crowd-pleasing picnic and cookout fare, which is all very nice. But every good Southern cook already knows the real way please the crowd, and that’s to make sure that the picnic hamper contains an ample supply of three things: fried chicken, old-fashioned potato salad, and ham biscuits.

Ham biscuits are one sandwich in which the bread around the ham is more important than the ham itself. If the biscuits aren’t good, even the best of hams won’t save them. And even indifferent ham takes on sparkle when it’s tucked into a really good biscuit. This is also the only time the biscuits don’t have to be fresh-from-the-oven hot, but are actually preferred to be at room temperature.

Making good biscuits isn’t complicated, but they do take practice. The good thing is that, once you get the knack, they’re easy and you can almost make them blindfolded. And serving homemade biscuits always makes people think you’ve gone to a lot more trouble than you have.

Popular wisdom is that good biscuits can only be made with a Southern soft-wheat flour. It does help insure success, especially for a novice, since soft winter wheat has less gluten and is more forgiving if the dough should happen to be overworked. But with care, you can use a good-quality all-purpose flour (a blend of soft and hard wheat flours), because the secret lies not so much in the flour but in not over-handling the dough. The only flour you absolutely can’t use for biscuits is bread flour.

1. Position a rack in the center of the oven and preheat to 500°. Sift or whisk the flour, baking powder and salt in a mixing bowl. Add the lard and cut it in with a pastry blender until it’s the texture of grits or polenta meal with lumps the size of small peas. Do not over-blend; the small lumps of shortening are what will make the biscuits flaky.

2. Make a well in the center and pour in 3/4 cup of the buttermilk. Mix with as few strokes as possible until the dough clumps together and pulls away from the sides of the bowl, adding milk by the spoonful until the dough is no longer crumbly.

3. Turn it out onto a lightly floured work surface and pat out 1-inch thick. Fold it in half and pat flat again. Repeat twice more, then lightly flour the surface and roll it out 1/2-3/4-inch thick. Using a 2-inch biscuit cutter dipped in flour before each cut, cut straight down without twisting into 12 biscuits. When cutting at the edges, be sure that there is a cut side all the way around. Lay them on an un-greased baking sheet; for very light, fluffy biscuits with soft edges, let them on touch; for crisper biscuits (the kind I prefer), space them at least half an inch apart.

4. There will be left over scraps: rework by lightly gathering them into a lump, gently fold it over itself and pat flat. Pat and fold as before about 3 times, just until the scraps hold together, then pat it out 1/2-3/4-inch thick and cut. To help the tops brown, you may brush them with milk or melted butter. Bake until they’re risen and golden brown on top, about 8 to 10 minutes.

5. While the biscuits bake, prepare the ham following the recipe or wrap the sliced ham in foil and warm it in the oven. Cover and keep warm. As soon as the biscuits are done, let them just cool enough to handle, then gently tear them in half. If liked, spread the insides with a little butter, then stuff them with the ham.

6. To serve them warm (when they’re at their best), pile them on a warm platter or into a linen-lined bread basket and serve immediately. For a picnic basket, the biscuits can be made ahead, stuffed, and allowed to cool completely before putting them into an airtight container. Put paper towels between each layer and make sure to get all the air out of the container before you seal it. They’ll keep for a couple of hours.

1. If the ham is especially old and rich, soak it in water to cover for about 10 minutes. Drain and pat it dry. Trim the fat from it and cut each slice into medallions about two inches across. Spread about the flour on a plate and put it by the stove.

2. Rub a cast iron or heavy-bottomed skillet with a piece of the fat trimmings, put them into it, and turn on to heat to medium. When the fat is rendered, take up the cracklings and lower the heat to medium low. If there isn’t enough fat to film the bottom of the pan, add drippings or oil as needed. Alternatively, you omit rendering the fat altogether and simply film the bottom of the pan with bacon drippings or vegetable oil.

3. Turn the ham lightly in the flour, shake off the excess, and add them to the pan. Sauté, turning frequently, until the outer surface is lightly browned and the ham is tender, about 8-10 minutes. Transfer the ham from the pan to a warm platter.

Notes: You can also use this method with slices of boiled or baked ham. Trim off most of the fat. Put enough of the fat in a skillet to make about a tablespoon of fat per serving of ham. Render it over medium low heat, take up the cracklings, and add the sliced ham. Cook slowly for about 5 minutes, turning frequently, until it’s heated through and lightly colored.

Recipes and some text adapted from Ham: A SAVOR THE SOUTH® Cookbook, UNC Press, September 2017. Copyright © 2017 by Damon Lee Fowler, all rights reserved.