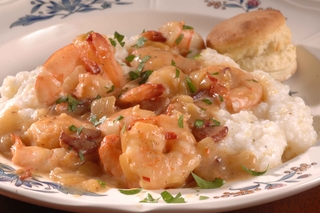 Summer Supper Shrimp and Grits. Photography by John Carrington
Long before it was discovered by ambitious chefs and made the poster appetizer for the Nouvelle Southern Cooking movement of the 1980s, shrimp with grits was hearty, humble breakfast and supper fare in the Carolina and Georgia Lowcountry that no one would have thought of as fancy, let alone an appetizer.

To begin with, it would not have occurred to anyone to have grits at dinner, particularly not at a formal table. In the second place, in those days the idea of something as substantial and satisfying as shrimp swimming in rich gravy as merely an appetizer would have seemed truly strange.

Once it got into the hands of creative chefs, however, there was no turning back until it had been so gussied up and overdone that it was hackneyed and passé. It then came full circle and was rediscovered as fashionably “retro”—whatever that is supposed to mean.

That’s not meant to be a cranky slam of what professional cooks do when they spin on a classic. It’s just that, in all their spinning, everyone lost sight of the original dish and its humble origins.

A lot of us stopped thinking of shrimp and grits as a perfectly sensible breakfast and supper dish and started thinking of it as too fancy for regular meals. We either quit making it altogether or saved it for company—something our grandmothers would rather have died than do.

This past Monday evening, I’d picked up some lovely local brown shrimp for supper. Since there were just two of us, it needed to be something simple, and I stood there with the refrigerator door open, getting nowhere, until the bag of grits on the bottom shelf caught my eye.

How could I have forgotten about shrimp and grits? The perfect supper on a hot summer evening had been there all the time, just waiting to be noticed.

For two persons (and this doubles nicely), you’ll need

1. Peel the shrimp, reserving the shells. Cover, and refrigerate the shrimp. Put the shells and 4 cups of water in a stainless or enameled pot. Bring it to a boil over medium-high heat, being careful not to let it boil over. Reduce the heat to a simmer and cook until the liquid is reduced to 1 cup. Turn off the heat, strain the broth into a stainless steel or glass bowl. Discard the shells. If not proceeding right away, cool completely, cover, and refrigerate. (If you’re in a hurry, you can omit this step and just use water for the gravy, but this does make it tastier.)

2. When you are ready to continue, put the bacon in a large sauté pan or skillet that will hold the shrimp in one layer. Sauté over medium heat, tossing occasionally, until browned. Add the onion. Raise the heat to medium-high and sauté, tossing frequently, until it’s pale gold, about 4 or 5 minutes. Add the garlic and sauté until fragrant but not colored. Sprinkle in the flour and cook, stirring constantly, until it is lightly browned, about 2 minutes more.

3. Slowly stir in the shrimp broth (or 1 cup of water) and bring it to a boil, stirring constantly. Simmer, stirring occasionally, until thickened, about 5 minutes. Add the shrimp and season lightly with salt and cayenne. Cook until the shrimp are curled and pink, about 2 minutes. Taste and adjust the seasonings and serve at once over hot grits.

1. Bring 2 cups water to a boil in an enameled or stainless steel saucepan over medium heat. Prepare a teakettle of water, bring it to a boil, and keep it simmering.

2. Slowly add the grits to the saucepan in a steady stream, stirring constantly. Bring it to a boil, still stirring, and reduce the heat to a steady simmer. Loosely cover the pan and cook, stirring often, until the grits are very thick and tender, about an hour. If the grits get too thick before they’re tender, add a little of the simmering water from the kettle.

This is probably my all-time favorite dish. We usually have it on Sunday nights. Don't ask me why...it just seems to fit the bill. I'll never forget the first time that we were served this at a fancy-schmancy wedding reception as a "grits bar". There were 10-12 different toppings for the grits, but the shrimp was everyone's favorite. It was served in crystal martini glasses. I'm sure that my grandmother got a chuckle if she was looking down on us that night. Thanks for sharing your recipe!!!

I've been given to understand that the martini glass grits bars are passe now . . . thank goodness! So glad you enjoyed the story, Lynn! Share!