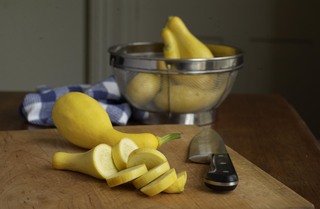 A still life of yellow crookneck squash, being made ready for the pan. Photography by John Carrington
Summer squash is in the air (and, where the drought hasn’t struck, overflowing in the garden). When fellow culinary historian Nancy Carter Crump mentioned them in a recent short essay, it inspired a look back to the four doyennes of Southern cookery, and turned up three different ways of getting the similar results from Mary Randolph, Lettice Bryan, and Annabella Hill: Read More
4 Comments 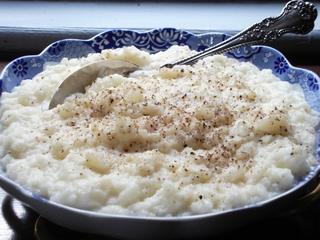 This past weekend, it was my privilege to speak at the annual George Washington symposium, held in the conference center at the gate to his beautiful Mount Vernon estate. This year’s symposium officially launched the historic site’s handsome new cookbook, Dining with the Washingtons, so the subject was naturally Virginia foodways.

There can be little conversation on that subject without mention of Mary Randolph and her landmark book, The Virginia House-wife, published in 1824. Widely believed to be the first comprehensive chronicle of Southern cooking, it is one of the earliest published cookbooks in America to be truly American and regional.

My job was therefore to discuss Mrs. Randolph and Virginia’s role as the cradle of that cuisine, a somewhat daunting assignment, since I (1) am not a Virginian and (2) had in my audience Nancy Carter Crump, one of the great pioneers in the field of modern culinary history. The preeminent authority on Virginia foodways, Nancy was the recipe developer for Dining with the Washingtons.

Fortunately, she is a gracious lady and, thanks to her work, and that of our mutual mentor, Karen Hess, I was not unprepared for the task.

The setting could not have been more perfect: Mount Vernon, under clear, deep blue skies and surrounded by brilliant displays of colored leaves, was at its most exquisitely autumnal best. However, the highlight was spending time with Nancy, whose charm, graciousness, and sheer knowledge made for the very best of company.

Rounding out the mix were historians David Hancock, an authority on Washington’s beloved Madeira, English culinary historian Ivan Day, Mount Vernon’s research historian Mary Thompson and senior curator Carol Borchert Cadou, and Chef Walter Staib, a lively and charming character who presides over the kitchen of historic City Tavern, which Washington frequented whenever he was in Philadelphia.

If only Mary Randolph herself could have been there to complete the round table. By all accounts, a formidable woman, Queen Molly (as she was nicknamed in her the glory days as Richmond society’s leading hostess) was known not only for her culinary prowess and keen wit, but for her often-sharp tongue and incisive opinions. She was not a woman who held back.

At any rate, one of the things that one does at foodways symposia is eat—and eat a lot. Over the course of the weekend, we sampled many things that Martha Washington would have ordered from Mount Vernon’s kitchen, all prepared from Nancy’s delft interpretations of dishes from period cookbooks in Mrs. Washington’s collection.

One of the things stood out in particular for me, however, (and of which I think Queen Molly would have heartily approved) was a simple dish that everyone else probably barely noticed: seasonal turnips mashed and dressed with butter and cream. It was the perfect foil for the herb-stuffed collared pork loin it accompanied, and a refreshing reminder that, while the cooking of the Virginia gentry could be as elaborate as a State Banquet, it could also be exquisitely simple.

Since Thanksgiving is fast approaching, it is worth noting that these turnips would also be the perfect accompaniment for roast turkey. Here it is, the original, by Hannah Glasse, and as interpreted by Nancy Carter Crump in Dining with the Washingtons.

They eat best boiled in the pot, and when enough take them out and put them in a pan, and mash them with butter, and a little cream, and a little salt, and send them to the table. But you may do them thus: pare your turnips, and cut them into dices, as big as the top of one’s finger, put them into a clean sauce-pan, and just cover them with water. When enough, throw them into a sieve to drain, and put them in to a sauce-pan with a good piece of butter and a little cream; stir them over the fire for five or six minutes, and send them to table. (Hannah Glasse, The Art of Cookery Made Plain and Easy, 1806 ed., p. 32)

1. Put the turnips in a large saucepan, barely cover with water, and bring to a boil. Reduce the heat, cover, and simmer for 10 to 12 minutes, until the turnips are fork-tender. Remove from the heat, and drain thoroughly.

2. Return the turnips to the saucepan, and set over low heat. Add the butter and stir until melted. Stir in the cream, and season with salt and pepper. Stir until well blended and heated through. Pour the turnips into a serving dish, and send to the table, or mash them roughly or until creamy, if preferred. Read More
4 Comments

Damon,
You were in your element! What great fun. Love the page....
Jane

Damon,
After reading the article, my mouth was watering so I went to Pascalina Farm in Montmorenci, SC this morning and bought fresh turnips. I think these were the best turnips I have ever eaten.

You all should also try the glazed turnips in Part II of this piece, posted above, especially if you can get little turnips that don't need to be trimmed down to little ovals (a pain to do but SO worth it!).