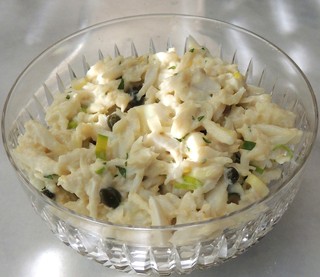 It hardly seems possible that Lent, the Christian season of penitence, is already upon us. Though the character of this season is marked by abstinence and reflection, it’s actually my favorite season for cooking, because the cooking—and eating—is more thoughtful. The simpler, less luxurious dishes that grace the Lenten table make one more conscious of the natural flavors of the food, and perhaps a little more thoughtful about what we put into our mouths.

But before Lent begins, we have one last whisper of the Winter Solstice holidays in Shrove, or “Fat”, Tuesday—or as it is known down in old Creole New Orleans, Mardi Gras. Designed as a way of using up the household stores of fat before Lent, Mardi Gras is the last burst of exuberant consumption (or in many cases, over-consumption) before settling in to the fast.

One could have the traditional pancake supper, I suppose, but to honor Mardi Gras, my mouth is stuck out for the centerpiece of every party ever given by friend and fellow food writer Julia Reed: a silver punch bowl mounded with Crabmeat Maison made as it is at the New Orleans landmark, Galatoire’s. That silver bowl of crabmeat landed her the job as food editor at Newsweek, and made her something of a legend among New York partygoers.

1. Put the mayonnaise in a large mixing bowl. Gently fold in the capers, scallions, parsley, and a large pinch of salt and liberal grinding of white pepper, both to taste. Cover and chill for at least 2 hours.

2. Gently fold in the crabmeat. Mound it into a large serving bowl, surround it with toast points, and stand back for the stampede.

1. To make the mayonnaise in a food processor, put the whole egg, lemon juice, vinegar, mustard, and salt in the bowl of a food processor fitted with a steel blade. Process 1 minute.

2. With the machine running, slowly drizzle in the oil in a very thin, steady stream until it is incorporated and emulsified.

To make it using a whisk or hand-held mixer: use the two egg yolks and whisk them together with the lemon juice, vinegar, and salt in a ceramic mixing bowl. Whisking constantly, slowly drizzle in the oil a little at a time. Read More

This looks so awesome Damon. I am so going to do this!