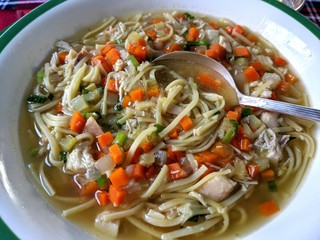 I don't know how you all greeted the new year, but I hope it wasn't the way we did: in bed with head colds. Whenever I'm under the weather, if I can stand upright for more than two minutes, I drag myself to the store for a chicken and make a big pot of broth for chicken soup. (The one good thing about being in the middle of a pandemic is that the discipline of wearing a mask and constant hand-washing meant that there was little danger of passing that cold around.)

Yes, I could've just opened a can, and have been known to do that while waiting for heat to work its magic on the chicken, water, and a handful of vegetables. But the mass-produced contents of a can aren't at all the same and simply don't have the healing power of homemade soup.

Maybe there's something to the claims that its components actually have healing power, and maybe it's only in my head: I don't really care. Cooking and eating it makes me feel better, and that's all I want or need to know.

Besides, making it doesn't take a lot of time or effort. Yes, it simmers for hours, but you're not standing over it the whole time. The cook's active involvement prepping, assembling, and skimming it at the beginning (which you don't even have to do if you don't care whether it's crystal clear), then straining, degreasing, and skinning and boning the chicken at the end is less than an hour altogether.

And besides, you simply aren't going to get that wonderfully healing aroma from a can.

I like a lot of ginger in chicken soup and the fresh finish that green onions and parsley lend it, but you should feel free to suit yourself by leaving them out or adding whatever else you happen to like. I've given the soup ingredients in approximate single-serving portions. A lot will depend on your taste and appetite, so adjust those as needed.

For the Broth (makes about 3 quarts):

2 or 3 sprigs each of parsley and thyme

For the Soup (per serving):

A handful of fine egg noodles or ¼-½ cup orzo, ditalini, or other soup pasta

1. To make the broth, put the onion, carrots, and celery in a heavy-bottomed 8-quart stockpot. Sprinkle lightly with salt, cover, and let them sweat over low heat. Meanwhile, disjoint the chicken and lay it on top of the vegetables. Add four quarts of water, raise the heat to medium, and, without stirring, bring it slowly to a simmer, about 45 minutes. As the scum begins to rise, skim it away and discard it.

2. When the scum no longer forms, add the peppercorns, ginger, herbs if using, and a couple of large pinches of salt. Let it return to a simmer, adjust the heat so that the bubbles are not quite breaking the surface, and simmer, uncovered, for 2-to-3 hours. Turn off the heat and let it cool.

3. Remove the chicken, then strain the broth into a large stainless steel, enameled metal, ceramic, or glass bowl. Discard the vegetables. Let the broth cool uncovered, then, if you're not using it right away, tightly cover and refrigerate it. When the fat is solidified on top (about 4 hours), remove and discard it. It will keep for 4 or 5 days, refrigerated, or for up to 3 months, frozen.

4. Meanwhile, let the chicken cool enough to handle, then skin and bone it. If not using it right away, put it into a large storage container, barely cover it with some of the broth, then cover tightly and refrigerated it for up to 4 days, or freeze it for up to 2 months.

5. When you're ready to make soup, for each serving bring 2 cups of the broth to a simmer over medium heat. Grate in fresh ginger to taste and let it simmer 5 minutes. Add the diced onion, carrot, and celery, bring it back to a simmer, and cook until they're tender, about 5 minutes.

6. Meanwhile, small dice ¼ cup of the reserved chicken for each serving. Add it to the soup, let it return to a simmer, and taste. Add salt and ginger as needed, then stir in the pasta and green onion (if using), bring it back to a simmer, and cook, stirring often at the beginning to keep the pasta from settling and sticking to the bottom, until it's tender, using its package directions as a rough guide. Stir in the parsley, then ladle it into a heated bowl and enjoy it.